Evicted residents distressed at prospect of living in Wolwerivier 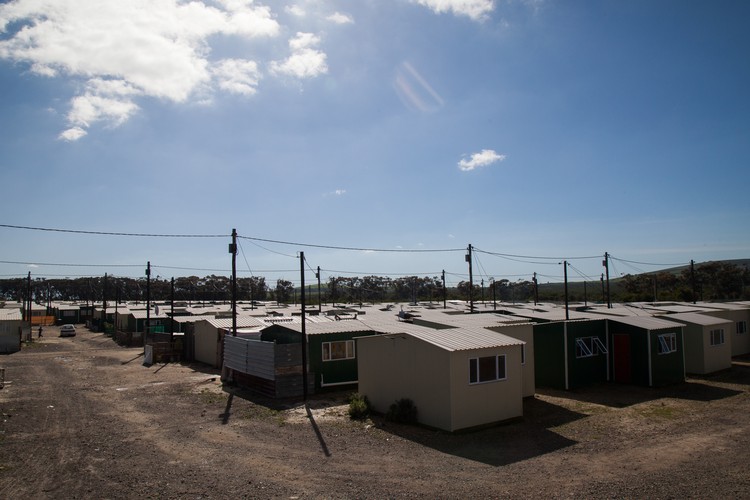 Members of Reclaim the City, many of them facing eviction from the inner suburbs of Cape Town, visited Wolwerivier to speak to the community about life in the temporary relocation area. Photo: Ashraf Hendricks

This comes on the back of a report by the City’s legal team to the Cape Town Magistrates’ Court in an eviction case, stating that Wolwerivier and Blikkiesdorp are currently the only available emergency settlements for people facing eviction.

In the last three years dozens of families, who have lived in areas such as Salt River and Woodstock for decades, have been forced out of their homes because of rising rent prices. Soaring rents have followed new developments and higher property prices, making it increasingly unaffordable for low-incomes households.

Shaneeka Abdullah, who was evicted from Pelican Park in April last year, said that with a two-month old and a 12-year-old daughter the thought of being moved to Wolwerivier was “stressful”.

The nearest clinic, which is in Dunoon (nearly 12km away), is open until 4:30pm on weekdays only. People have to take off work to visit it or travel further to a facility that is open in the evenings.

Abdullah said her youngest daughter has a problem with her ears and has to attend regular treatment at Red Cross War Memorial Children’s Hospital in Mowbray. “How will I manage to travel up and down from there?” she asked.

For most people living in the Cape Town metro, the nearest social grant paypoint or shopping centre is a short taxi ride or within walking distance from their homes. But for beneficiaries living in Wolwerivier the nearest cash pay point is in Table View, and it costs up to R22 just to get there. It is a 20-minute, non-stop taxi ride from Wolwerivier to Leibrandt van Niekerk community hall in Table View.

Wolwerivier resident Cylvia Sigojo, who is unemployed, said that to save money she usually sets out on foot at 5am to catch a taxi in Dunoon. It takes her about two hours.

“I’m unemployed and rely on my children’s grants,” says Sigojo. “I then get a taxi from Dunoon to Cape Town if it’s too full in Table View to collect the grants …. If you get back to Dunoon after the last taxi to Wolwerivier [which leaves at 8pm], you have to walk back home again.”

A taxi from Wolwerivier to Dunoon costs R12. It is another R9.50 to the cash point in Table View or R13 to the Cape Town CBD or R14 to Bellville. If she does not walk for four hours, it costs Sigojo between R43 and R52 to collect her R720 in children’s grants.

Mzwandile Jackson Mgudlwa, a community leader in Wolwerivier, said they had asked that taxi operators create a direct trip to the paypoint for elderly beneficiaries when they were first moved to the camp in 2015. Nothing had come of this request, he said.

The nearest shopping mall is off Usasaza Street in Dunoon. Sigojo said the mall doesn’t always have everything she needs for her children for school, such as sports clothes, shoes, and school uniforms. “So then I’ll have to pay for another taxi to Bayside [Table View] or Bellville or sometimes to Cape Town,” she said.

The mall is where most people also go to collect their grants at the Shoprite. “Those who prefer going to the bank use this [Capitec] ATM because not all of the banks are here,” said Sigojo.

She said if she has a lot of shopping bags she needs to take an additional taxi for R7 to get to the Dunoon taxi rank.

There are a few spaza shops in Wolwerivier but the range of goods is limited.

Shaneeka Abdullah, who is now occupying the old Woodstock Hospital, which Reclaim the City renamed the Cissie Gool House, was also with the group that visited the nearest police station. It is in Philadelphia, a small farming community about 15 kilometres from Wolwerivier.

The group found the station to be under-resourced, although it has to service a large area which includes farms and several informal settlements. Wolwerivier residents said there was no public transport to the police station.

Abdullah said, “We spoke to a sergeant who told us that it can take between three to five hours before they send a vehicle out to Wolwerivier, depending on how urgent the call is. He said another problem is that they don’t always have enough vehicles to send out, so they usually have to wait until one is available.”

“At least after our visit on Saturday they [the police] said they were willing to meet with the leaders from Wolwerivier to discuss their issues. They said they don’t have the resources to put a mobile station closer,” she said.