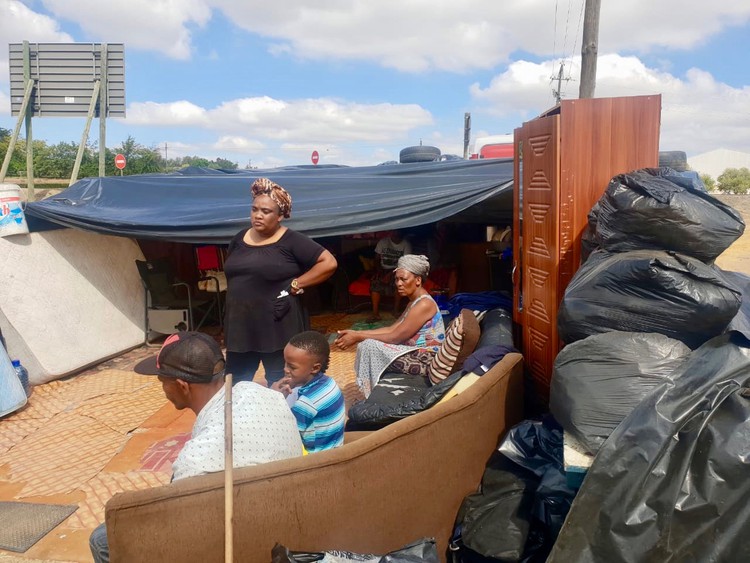 Ten members of the May family have been squatting outside the farm gates ever since their eviction, with all their belongings, including couches, mattresses and a cupboard, and only a plastic sheet to cover them. Photo supplied

For nearly a month Zonwabile Alfred May and his nine family members have been living on the R44 roadside near Paarl. They were evicted from the Windmeul Kelder wine farm on 26 March, where they had lived for almost 40 years.

The May family have been squatting outside the farm gates ever since the eviction, with all their belongings, including couches, mattresses and a cupboard, with only a plastic sheet covering them.

Elna Brown, who is dating May’s son, Dumsani, said the family are trying to maintain some normality. “The children are living with my sister so they can still bath and go to school. I’m still attending college and writing exams. It’s hard because we are still sleeping outside,” she said.

“It has been hot, windy, and it has rained, but with God’s grace the family survives. They are unemployed and in desperate need of funding so they can buy food,” said Billy Claasen, director of the Rural and Farmworkers Development Organisation.

The family’s troubles began after May was fired for alleged misconduct in 2008.

A two-year legal battle with Windmeul to evict them ended last month. The directors and management of Windmeul Kelder detailed their version of events, making several allegations against May and his family.

The family have repeatedly rejected the Drakenstein Municipality’s offer to house them at the caravan park in New Orleans, Paarl. The building offered to them is not big enough to house ten people and their belongings. The park is already home to over 150 evictees who have been living in tents for over a year. The small brick structure offered to the May family is currently used as a washroom. It often floods due to leaking pipes.

Gerald Esau, director of community services at Drakenstein Municipality, said, “Our offer is still on the table.” He said the New Orleans Park was the only available option to place families in need of emergency accommodation in the area. He said construction at the municipality’s emergency housing project recently came to an abrupt halt after the property was illegally occupied.

“This area was recently invaded by the surrounding community who refuse for these evictees to be accommodated in the area. We could therefore only offer New Orleans Park to the Windmeul evictees,” Esau said.

Lawyers representing the family are now gearing up to challenge their eviction in the Randburg Land Claims Court on 25 April. They will also be asking the court to evaluate the living conditions of the alternative accommodation offered by the municipality.