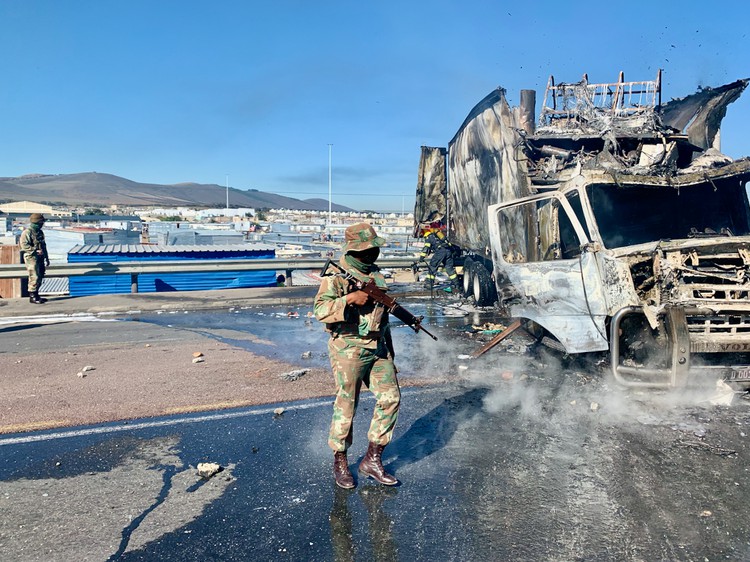 The continued demolition of shacks erected on vacant land near the Killarney International Raceway has triggered riots in Dunoon, Cape Town, since Sunday. Police have arrested 14 people, Table View police spokesperson Captain Adriana Chandler confirmed. On Tuesday morning the situation remained volatile with soldiers and police deployed at various sites in the area.

On Monday morning, a truck was set alight on the N7 near Richwood and two trucks torched at the Potsdam Road bridge near Milnerton.

Protests started on Sunday and a goods delivery truck was set alight at the Potsdam bridge. The protesters took a shortcut through Siyahlala informal settlement to the N7, where they protested off Malibongwe Drive before heading to the Dunoon taxi rank. Police and South African Defence Force members used rubber bullets and teargas to disperse a crowd of about 300. Most of the protesters were women.

Several of the protesters told GroundUp they had occupied vacant land near the racecourse on the Diep River because they had been evicted from their backyard shacks. A 38-year-old woman, a mother of three, said she had been renting a backyard shack since 2003, but could no longer pay her R700 rent plus R250 electricity, as she had lost her income because of the Covid-19 lockdown.

She said they had started the occupation on 15 May, rebuilding their shacks each time these were demolished by the authorities. They had named the new informal settlement Covid-19.

A woman, who identified herself as Ntombizanele, showed GroundUp fresh wounds on her back left by rubber bullets. She said she had borrowed cash and used her child support grant to buy her shack building materials, which had now been confiscated.

On Monday, at the site of the occupation there were two bakkies belonging to the City of Cape Town and one white Hyundai H1 Bus with “Red Ants tactical response unit” written on it. It was filled with armed men wearing black uniforms.

Mayco Member for Human Settlements Malusi Booi said, “The City has continued an ongoing process to protect City land in this area. The City has removed illegal structures on numerous occasions in this area. Attempted occupiers are well aware that any action to attempt to invade land would be against the law.”

Booi said that under lockdown provisions, people may not be evicted. He said those who have been evicted can lay a charge at the nearest police station against their former landlords.