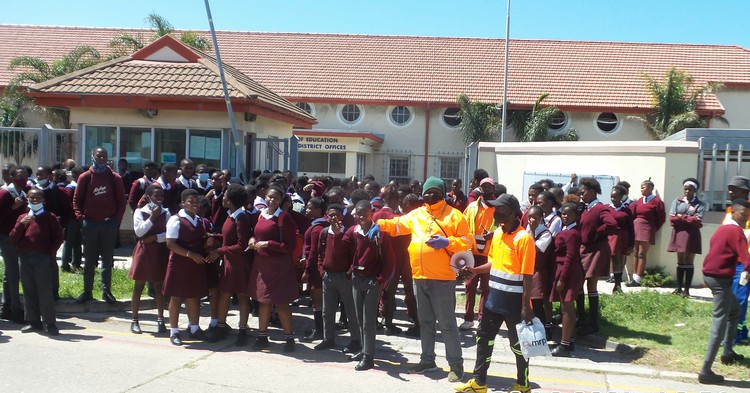 Learners from Ithembelihle Technical School in Gqeberha picketed outside the provincial education department’s office on Wednesday to demand that their school be fenced. Photo: Joseph Chirume

Parents and members of the New Brighton community are rallying together to do day and night patrols around Ithembelihle Technical School in Gqeberha.

The school has been the target of numeorus thefts and vandalism attacks in recent months, the most recent a month ago. Parents are now demanding that the property be fenced.

“If officials were serious about bringing development to our community, they should have secured the school premises long ago,” said Sonwabo Nosilela, chairperson of the school governing body.

He joined parents and learners outside the Department of Education district office on Wednesday, demanding a fence be built to secure the school.

Ithembelihle has become a crime hotspot, with criminals often targeting the workshop rooms to steal expensive equipment such as motor vehicle engines, welding equipment and other tools. The school has 924 learners.

“I have been begging the department on numerous occasions to erect a strong barrier around the school. It seems my plea and those of other members of the community have been falling on deaf ears. Now expensive equipment has been stolen and our children have nothing to use for their practical courses,” Nosilela said.

“I have lost count of how many times the school has been broken into. Burglaries now take place almost every week with equipment stolen worth more than R6 million,” said Nosilela.

Resident Ayanda Mooi has joined a team of ten volunteers patrolling the school grounds. “The school benefits the community but there are some criminal elements who are breaking into the workshops and stealing machinery. We decided that we cannot fold our hands while these criminals strip the future from our children.”

Nosilela said the school met with senior officials from the department on Wednesday and they are optimistic that the school will be fenced soon.

Eastern Cape Department of Education spokesperson Mali Mtima said Ithembelihle Technical School is high on its priority list in Nelson Mandela Bay. Mtima said the school will be fenced should there be available funds.