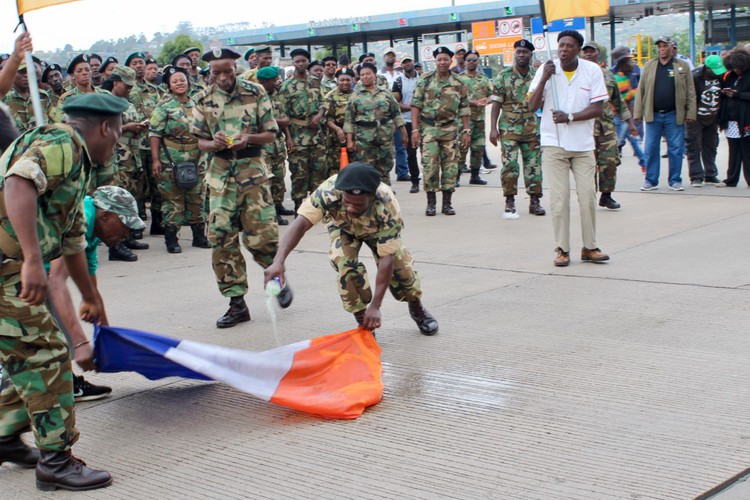 The Nelson Mandela Foundation is asking the Equality Court in Johannesburg to declare the display of the old South African flag hate speech and harassment under the Equality Act. The case is likely to set the boundaries between constitutionally-protected free speech, however offensive to some, and hate speech.

The background to the case is that on 30 October 2017 nationwide protests, in which Afriforum played a leading role, were held to protest over attacks on farmers. The protests were named #BlackMonday. It is disputed to what extent old South African flags were displayed at the protests.

In a press release following the protests, the Nelson Mandela Foundation decried the display of the old flag as indicative of support among some protesters for the old apartheid system.

Was the old flag displayed prominently?

On social media, photos of protesters carrying the old flag were circulated, but at least some of these photos were fake or for a different event. In an SABC2 debate the following week, Afriforum’s CEO Kallie Kriel dismissed reports of the old flag being displayed as fake news. The mayor of Midvaal in Gauteng, however, claimed he had seen them. Two Groundup reporters covered part of the Cape Town protest and did not witness conspicuous displays of the old flag.

Kriel said that Afriforum discourages its members from displaying the flag as it offends people, but that it should not be banned. Banning the old flag would be the same as banning communist symbols, which Kriel considered offensive, as communism, he asserts, was a crime against humanity.

The Promotion of Equality and Prevention of Unfair Discrimination Act, also known as the Equality Act, defines hate speech as showing a clear intention to be hurtful, incite harm and promote hatred. All three conditions must be present for hate speech to exist. This does not include genuine engagement in artistic creativity, academic and scientific inquiry and fair and accurate reporting in the public interest. 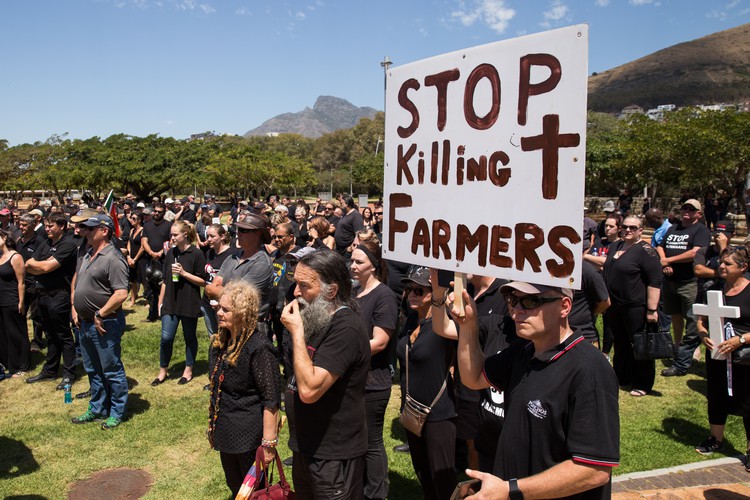 Farmers demonstrate against farm murders at Cape Town Stadium in the #BlackMonday protests in October 2017. At this protest GroundUp did not see any conspicuous displays of the old flag. We saw only one person with a small old South African flag on their T-shirt. Archive photo: Ashraf Hendricks

The Foundation’s CEO Sello Hatang affidavit says he was personally offended by the display as it recalled instances of racial abuse from his youth. “Gratuitous displays of the old flag, which serve no genuine journalistic, academic or artistic purpose in the public interest, are not about remembering but about forgetting our painful past. They do nothing to advance social justice, national unity and human dignity; quite the opposite. They cannot be protected by our Constitution, or defended in the name of tolerance, reconciliation and all of the values underlying the Constitution.”

On its website, the Foundation states that Germany has passed laws criminalising gratuitous displays of Nazi symbols, as they signify only oppression, hatred and the Holocaust. But the Foundation says it is is not pressing for criminalisation of gratuitous displays of apartheid symbols. “Instead we are using law to discourage their use.” The Foundation says that the Promotion of Equality and Prevention of Unfair Discrimination Act of 2000 empowers Equality Courts to order remedies such as an apology, community service, or sensitivity training.

Johannesburg Pride, representing the LGBT community, has joined as a friend of the court, and argues that the apartheid regime oppressed people not only on grounds of race but sexual orientation.

Displaying the old flag “demeans, humiliates, and creates a hostile and intimidating environment toward members of the LGBT+ community who were also victims of apartheid and its legacy,” says Khuresha Ally, director of Johannesburg Pride.

Afriforum says the Foundation’s court case, if successful, would be an attack on free speech. Deposing for Afriforum, deputy CEO Ernst Roets says the organisation has no particular love for the old flag and what it represents. “In the exceptionally rare instance that anyone participating in one of our events brings an old flag with them, we ask them to put it away.”

However, a wide-reaching ban on the flag, such as that sought by the Foundation, would be “an unconstitutional infringement of the right to freedom of expression.”

Freedom of speech is the pre-eminent freedom guaranteed under the Constitution, argues Roets: “Freedom of expression is the cornerstone of a functioning democratic state. It gives people the opportunity to be exposed to differing viewpoints to make informed and legitimate decisions about their political lives.

“If citizens are under the impression that the ideas they are exposed to have gone through a filtering process to remove all inappropriate forms of expression, then they are less likely to be critical of the material that they consume. Societies that allow for a broad selection of opinions create an environment that strengthens people’s analytical skills and trains them to question the views that are presented to them.”

Afriforum also argues that ideas that are suppressed can later result in violence.

Banning displays of the old flag is inappropriate as those displaying it may have different intentions, argues Roets, who presents evidence of Sharpeville residents burning the new South African flag to protest Human Rights Day commemorations being moved from Sharpeville to Soweto. “By way of analogy, it may be thought that anyone who burnt the new flag was motivated by hatred towards black South Africans and a desire to reinstitute apartheid,” says Roets.

He adds that displaying the old flag is not hate speech, nor does it amount to a call for action or an incitement to cause harm.

Roets then turns on ANC and SA Communist Party symbolism, recounting atrocities committed by its foot soldiers against South Africans. If the old SA flag is banned, a precedent is set for the banning of the ANC or SACP flags, or indeed the British Union, on the grounds that they may be distressful to victims of violence committed under these banners.

Roets dismisses the claim that the old flag represents harassment, which “must amount to a torment that is persistent and repetitive”. The best remedy for offensive speech is counter-dialogue.

The #BlackMonday protests were sparked by the murder of Western Cape farmer Joubert Conradie. Roets says the subsequent reporting on the protests ignored the farm murders and focused instead on the claims that some protesters carried old flags.

He argues that the Nelson Mandela Foundation is dismissive of farm murders. There were 357 incidents recorded in 2016/7 with 553 victims of whom 74 were murdered. “The notion that the #BlackMonday marches were only concerned with violence against white farmers is outrageous. All violence, regardless of the race of the victims or the perpetrators is unconscionable,” says Roets.