Equal Education calls on Ramaphosa to get involved in fixing schools 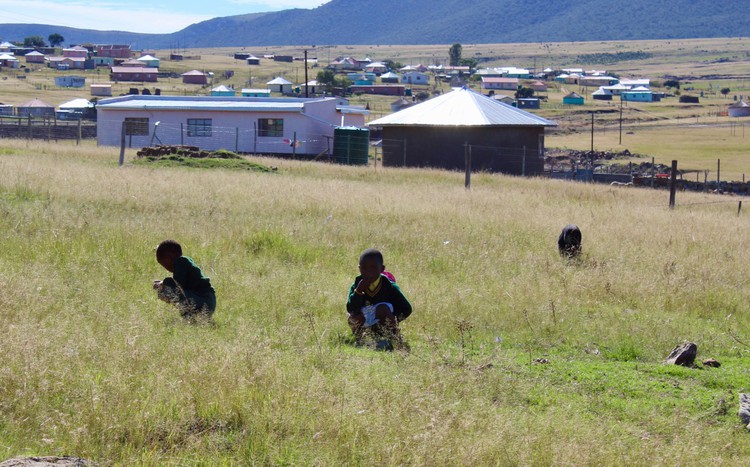 Young children use a field as a toilet at Ntshingeni Senior Primary near Cofimvaba in the Eastern Cape. Equal Education wants schools like this to be fixed. Photo: Yamkela Ntshongwana

The Constitutional Court has turned down the Department of Basic Education (DBE) appeal against the landmark Norms and Standards case brought by Equal Education - and the education lobbying group is now demanding that President Cyril Ramaphosa gets involved.

Precillar Moyo of the Equal Education Law Centre, the legal partner of Equal Education, told GroundUp that the significance of the July win was the closure of the “escape clauses” in regulations. These made the implementation of minimum norms and standards “subject to the resources and co-operation of other government agencies”. Moyo said the decision made the “state as a whole [bear] obligation to make sure infrastructure is improved. The DBE is responsible. Learners can now hold the department to account.”

The DBE then appealed against the decision, citing a lack of proper resources to fulfill its responsibility to take on the failing infrastructure of South African schools on its own. The Constitutional Court dismissed the appeal on 2 November, citing it as unconstitutional because of the case’s emphasis on the fundamental right to equality.

Equal Education general-secretary Noncedo Madubedube told GroundUp that the organisation began the case because of the deep inequalities in resources and sanitation for South African schools. According to Madubedube, the country’s educational structure has not yet adapted to a post-apartheid South Africa, and the case against DBE was an attempt to begin the process of ushering in the foundation for equality in education.

“We want to monitor and regulate the government,” said Madubedube. “There needed to be a state compulsion to begin the process of evolution within the education system, that’s why we took the Department of Basic Education to court. We want a country where young people can have the opportunity and resources to properly engage with the economy. It starts with education.”

Madubedube emphasised the flaws in the DBE’s appeal, explaining that the government has the resources to fix educational infrastructure but these resources are not being used properly.

“The system is organised by the government but change is conducted by the middle-man; contracted workers who are not being paid well enough for the work they’re doing and are not being held to proper standards. The government needs to take full responsibility for improving infrastructure.”

Madubedube lamented the unnecessary and costly process of the court case and the following appeal, calling it “disappointing” to resort to litigation to get the DBE to respond to calls for change. “There’s not enough urgency to help children,” she said

Madubedube argued that the future of education begins now: “There’s never been a time but now to put pressure on government to do their work. School communities now have law to protect their right to a dignified learning environment.”

Three days after the November appeal rejection, Equal Education wrote an open letter to President Cyril Ramaphosa demanding his co-operation in the betterment of school infrastructure and immediate accountability in the Limpopo school system. The letter stated that “Equal Education is appalled by the ‘plan’ to fix Limpopo school toilets submitted to the Polokwane High Court by the national Department of Education and the Limpopo Department of Education. The ‘plan’, which followed a High Court order, is an affront to the memory of children who have died because of poor school infrastructure. The Polokwane High Court ordered the departments to fix inadequate and unsafe sanitation after hearing the case of the Komape family. We are an amicus curiae ­– friend of the court – in the case.”

The letter references the case of Michael Komape, the five-year-old boy who drowned in a pit toilet at Mahlodumela Primary School in Chebeng Village, outside Polokwane, on 20 January 2014. Komape’s parents sued the Limpopo Department of Education for damages. The case reached the Polokwane High Court, and the DBE was ordered to submit a report on how many schools use pit toilets and when work can begin on fixing basic infrastructure. This report was presented in Parliament last week, according to the Daily Maverick.

Precillar Moyo of the Equal Education Law Centre called the report “unreasonable”. The DBE claimed that it could not even begin the process of revising school infrastructure until 2026, ten years after the DBE’s own deadline of 2016.

Moyo said that many of the Limpopo schools with failing infrastructure were not even included in the report, and that there was no rational explanation why it was delayed to 2026. The DBE claimed that they have already spent their budget for the year, but Moyo asserted that one year of a spent budget was not enough to justify a ten-year delay. Moyo said that the DBE should “go back to the drawing board and reassess how schools are analysed, categorised, and how [the DBE] shall prioritise their response” respective to the immediate need for care at individual schools.

According to the Daily Maverick, the Department of Water and Sanitation has set its own deadline to eradicate pit toilets in schools by 2020.

Madubedube urged Ramaphosa and the DBE to sit down with Equal Education and discuss the future of schools, citing the Komape case as an urgent call for government interjection.

Ramaphosa’s office and the Department of Basic Education could not be reached for comment.