Payslips printed on the back of lotto tickets 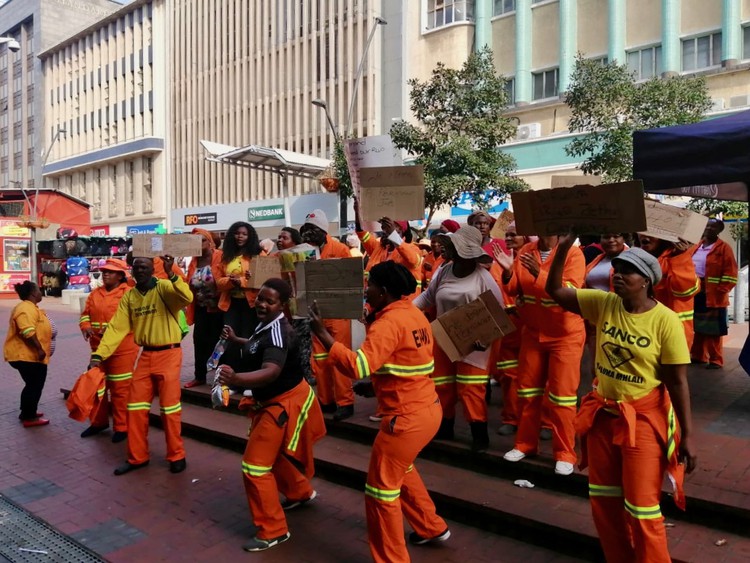 The department employs about 200 people in Uitenhage under the EPWP. They clean public spaces, drains and do weeding along roadsides. They earn R93 a day.

Unhappiness has been simmering for weeks.

On Tuesday morning the workers were paid; those from KwaLanga collected their salaries at Caledon Street post office; those from KwaNobuhle at the SA Post Office in the shopping centre.

But workers say they don’t understand how their salaries are calculated. They also want to be made permanent employees of government. Most of the workers who spoke to GroundUp earn R744 per month and work two days a week.

Phumla Runeli, of KwaNobuhle, has been employed in the programme since 2009. “All we have as payslips are statements printed on the back of lotto tickets with our ID numbers and names,” she said.

“During the World Cup in 2010, they workshopped us,” said Runeli. “They said the workshop was based on management skills, adding that after this project they would let us work as business people, independently.”

Last week Friday, she joined over a dozen other EPWP workers picketing in Zola Nqini Square outside the city hall.

She said though she did the same work as her fellow employees, they were not paid the same amount. She also said that her salary often differed from month to month.

Department spokesperson Unathi Binqose said, “We understand the need for permanent employment. However, the nature of the work done by EPWP workers does not allow for that … They are working on projects , so they will be contracted as per the demand for their services.”

At 3pm today the workers were in a meeting with the Department of Roads and Transport.