Environment officials searched mine with unlawful warrant, argues mine lawyer

Search was conducted after controversial Australian-owned West Coast mine, Tormin, allegedly caused a cliff to collapse 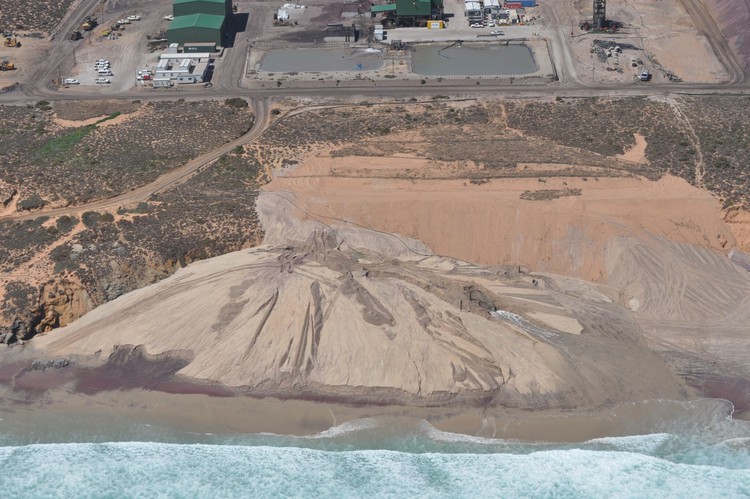 The cliff that collapsed in front of the Tormin mine (and after Tormin attempted to repair it). Taken anonymously in June 2016.

The Green Scorpions did not inform a Vredendal magistrate about a “vital debate” raging over whether they had legal status to conduct compliance monitoring and enforcement at Australian-owned Tormin mineral sands mine on the West Coast.

Partly because of this non-disclosure, the magistrate was persuaded to issue a warrant authorising a search-and-seizure operation by the Green Scorpions (the government’s environmental management inspectors) to look for evidence of environmental degradation allegedly caused by unauthorised mining activity at Tormin, argued Advocate Peter Hodes in the Western Cape High Court on Thursday.

Hodes argued that the warrant had been unlawfully obtained and led to an invasion of the rights to privacy and property of both the mining company and its 240 employees.

The team carrying out the search-and-seizure had consisted of 25 people, including police in uniform – “And as you know they do carry firearms” – and some police dogs. When courts were called on to explore the validity of such warrants, they were always careful to guard such rights “jealously”, Hodes added.

He was appearing for Tormin-owner Mineral Sands Resources (MSR) * in its review application of the search-and-seizure operation, authorised in terms of the Criminal Procedure Act in September last year. Criminal charges are now being investigated against MSR, although it has not yet been formally charged.

The Tormin mine, 400km from Cape Town on the coast near Lutzville, produces mineral sands like zircon, ilmenite, rutile, magnetite and garnet.

The investigation relates to allegedly unauthorised operations that caused the catastrophic collapse of sea cliff directly in front of the mine; the illegal dumping of mine tailings into the sea; construction of an unauthorised “jetty-like structure” in the sea; the illegal clearing of natural vegetation during the unauthorised expansion of mining activities; and the unauthorised widening of roads on the mining site.

It also seeks a declaratory order to the effect that, because of the “One Environmental System” for mining introduced by the government in December 2014, the Department of Mineral Resources (DMR) has full authority over mining-related environmental issues.

It argues that because neither DEA nor DEADP had authority for environmental compliance monitoring and/or enforcement in the industry because of the new system, it had been fully within its rights to query the jurisdiction of a senior DEA official who wanted to inspect the mine in response to complaints. The practical effect of this was a refusal to allow him entry to the mine.

The review application is being opposed by the DEA and DEADP, who have brought a counter-application asking for evidence collected during the search-and-seizure to be preserved, even if Judge Owen Rogers agrees to overturn the warrant. They also want the judge to declare that the Green Scorpions have full compliance monitoring and enforcement authority in terms of the Integrated Coastal Management Act, even in mining areas.

Hodes argued that if the magistrate had been informed of the mining company’s view that the Green Scorpions did not have jurisdiction to conduct the search-and-seizure and of the complexity of the relevant legislation, he would have refused to issue the warrant and referred to dispute to a higher legal authority. “On that hot afternoon in Vredendal, he would have said ‘Go and apply to the High Court’ and that would have been decisive,” Hodes suggested.

The mining company had objected to the presence of DEA and DEADP on grounds of jurisdiction, and it had never been explained why the DMR had not been named in the warrant and led the search-and-seizure operation, Hodes continued. Also, many other “less invasive means” could have been used to obtain evidence of alleged environmental degradation at the mine – including the use of drones and accessing the mine via the inter-tidal zone.

Judgment has been reserved.

*Mineral Sands Resources is a subsidiary of Mineral Commodities Ltd that trades on the Australian Securities Exchange as MRC. MRC is the company that for 13 years attempted to develop a mineral sands mine at Xolobeni on the Pondoland coastline of Transkei, before announcing in July last year it was selling its stake in this highly controversial project to its BEE partner.