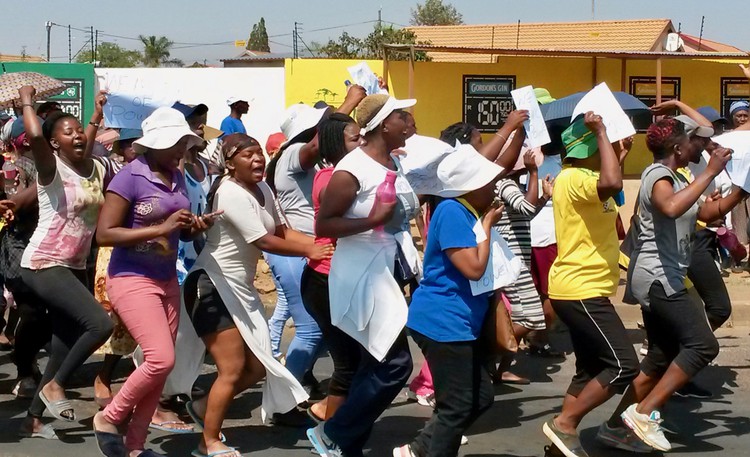 Residents of Soshanguve ward 26 marched to the City of Tshwane’s local offices in block KK on Wednesday. In a memorandum, the residents demanded housing, tarred roads, uninterrupted electricity and proper maintenance of the sewage system. They want to be prioritized by the Integrated Development Plan (IDP) of the metro.

Placards read: “We want houses” and “Enough with blackouts”.

Nobody was available to accept their memorandum. After waiting for over two hours, the marchers blockaded the entrance to the offices with stones, garbage and refuse bins.

Community leader Sabelo Ntuli said: “We oppose the newly drafted IDP of 2019/20 as it excludes us even after sending our priorities for development. The City has chosen to turn a blind eye to our needs and demands.”

“What happened to the approved 800 units of houses that were meant for block KK?” he asked.

“We want the City to protect small businesses, to build stalls that will formalise street vendors, and to establish a business hub around the Soshanguve north area … We are sick and tired of the constant power cuts, with the same explanation of cable theft for over a year now,” he said.

The marchers waited for three hours in the scorching sun before their memorandum was eventually accepted by Tshwane divisional head for the mayoral office, Norman Mohale, on behalf of Mayor Stevens Mokgalapa.

Mohale said: “We have heard their grievances and tomorrow I am going to convene a meeting with the region, relevant departments and the steering committee so that we can go through the memorandum.”

“I am aware of the constant blackouts in the area. A part of the intervention we have made to resolve the issue is to reroute the cable that constantly gets stolen by thugs here. That application is still sitting with the provincial sphere of government. But we have also deployed extra metro police to patrol the area so that we can try to avoid these constant blackouts. Obviously, that is not enough. That is why we need to go back to the drawing board and see what immediate interventions we can come up with.”

He said cable theft was a problem across the city.

The residents gave the City 14 working days to respond to their demands, failing which they threaten to take to the streets.