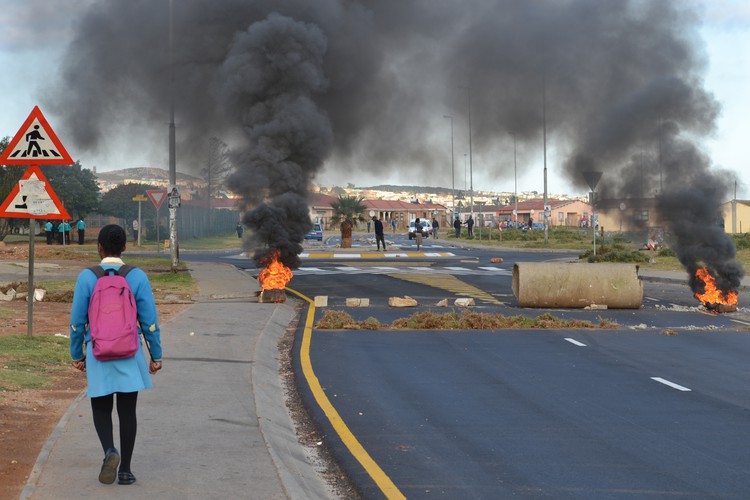 Resident of Endlovini informal settlements in Khayelitsha, Uitenhage, blockaded the roads with rubble and burning tyres on Monday. They want the municipality to provide toilets and electrification in the settlement. Photo: Thamsanqa Mbovane

Protesters want the municipality to provide toilets. They also want the settlement to be electrified.

The group also burnt tyres on busy roads such as Ponana Tini Road during peak traffic.

By 11am, police began clearing the debris while over dozens of protesters remained in the area. Residents of Endlovini have been living on the vacant plot since December 2018.

Siyakhumbula Pikini said life without a toilet posed a health risk for the families living around Kiva and Cutshe streets. “We relieve ourselves in on open space,” he said.

Pikini said the councillor met with residents two weeks ago and he promised to deliver eight mobile toilets in less than a week. This never happened, said Pikini.

“We have no site numbers in these shacks. The councillor came with a letter last week, saying we have to wait until after the by-election on 20 September,” said resident Lukhanyo Banana.

He said last week a two-year-old boy was hospitalised after eating faeces outside his home. Councillor Ntshiza told GroundUp he was aware of this incident.

He said funds had been set aside for the settlement. He attributed the delays in providing the services to the absence of a chief financial officer in the metro.

“Residents must be patient,” he said.

Protesters were still gathered in the area at the time this article was published.

On Tuesday, a day after residents burnt rubble outside their Councillor ‘s office, they said five mobile toilets were delivered for their 210 shacks.

Resident Siyakhumbula Pikini said, “Bobani visited our informal settlements and gave us five mobile toilets. He said again on Friday … he will visit to address us on the issue of electrifying the shacks … The toilets are chemical and are good condition and will be cleaned 3 days a week.”