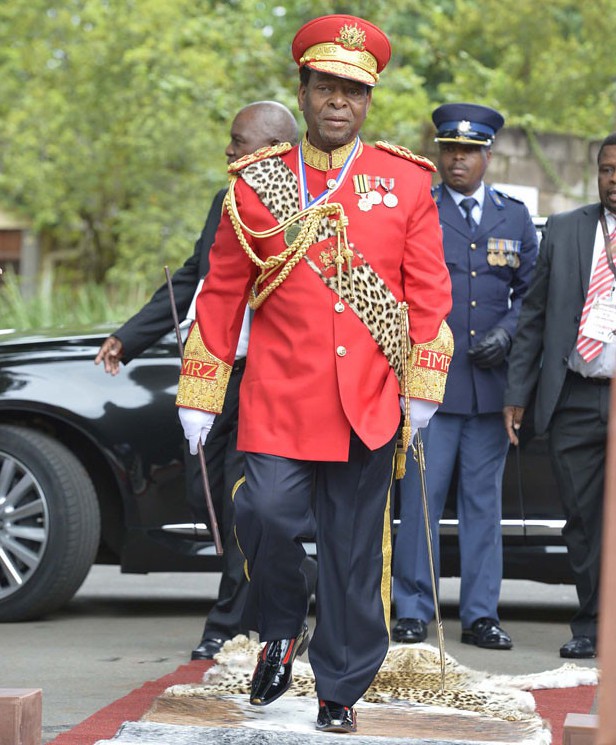 A politically-charged court case involving millions of rands in rent paid to a trust headed by Zulu King Goodwill Zwelithini has been postponed at the last moment.

The royal Ingonyama Trust has been accused of “extorting” rent from rural communities in KwaZulu-Natal, without their informed and genuine consent.

The case was set down to be argued on Friday in the Pietermaritzburg High Court, when lawyers acting for the residents hoped to raise questions over how millions of rands in rent collections by the Ingonyama Trust Board have been spent recently.

The sole trustee of the Ingonyama Trust is King Goodwill Zwelithini.

But on Tuesday, Judge Peter Olsen informed the legal parties in the matter that KZN Judge President Achmat Jappie had decided that because of the serious issues to be decided in the case, the matter should now be heard by a full bench.

The matter would have to be set down for two days, as the risk of it becoming part-heard by a full bench would become difficult to manage as more than one judge’s schedule would now be involved.

The case could therefore not be heard on Friday, nor during the current session which ends next month, suggesting that the matter will only be heard next year.

Olsen indicated that a request for televised coverage of the case would also have to be considered by the full bench in due course.

Lawson Naidoo, executive secretary of the Council for the Advancement of the South African Constitution (CASAC), which is one of the main parties to the case, said on Tuesday night that he was shocked to hear of the delay.

“Why wait for the eleventh-hour to announce this when this case was set down for hearing months and months ago? We don’t understand that, and at the very least, we would have expected to have been given an opportunity to make representations before the decision (to postpone) was made,” said Naidoo.

According to court papers, the Ingonyama Trust received over R106 million from residential and commercial leases during 2017 alone on rural land controlled by the Trust.

The trust was set up in 1994, shortly before the country’s first democratic elections, vesting custodianship of almost one third of the land in KwaZulu-Natal under King Goodwill.

The chairperson of the Ingonyama Trust Board, Jerome Ngwenya, has characterised the court case as a “direct attack against His Majesty, Amakhosi and the Zulu Nation”.

“We run the risk of stripping the Zulu Nation (of) the last cloth to wear,” Ngwenya charged in a responding affidavit, adding that the court case was “disrespectful and provocative”.

But the applicants – CASAC, the Rural Women’s Movement and seven rural residents of KZN – claim that: “Since 2007, and possibly earlier, the Ingonyama Trust and the Ingonyama Trust Board have been undermining the security of tenure of residents and occupiers of Trust-held land in KwaZulu-Natal, and extorting money from them, by unlawfully compelling them to conclude lease agreements and pay rental to the Trust to continue living on the land.“

One of the applicants, 73-year-old Hluphekile Mabuyakhulu, from the Jozini district, stated in an affidavit that an announcement was made in 2011 that local residents had to attend a community meeting at the offices of the Traditional Council.

“They told us that if we did not conclude leases then we would not be recognised by the King as being part of the community. They told us that our land would be taken away and we would be left on the streets to fend for ourselves,” stated Mabuyakhulu.

She said the terms of the new lease agreements were not explained, all documents were printed in English, and only when she received a final copy of the lease in 2012 did she realise that she would henceforth pay R1,500 annually (escalating at 10% per year) for her 0.24 hectare plot, and that “everything on it could be taken away” if she did not pay this rent.

Mabuyakhulu states that as a pensioner she received a grant of about R1,300 per month and she had to borrow money to survive.

Another Jozini resident, 51-year-old Mabongi Gumede, said she was struggling to support her three daughters and their children and now had to pay R2,900 a year to the Ingonyama Trust.

She claimed she was also told that people living under chiefs had to sign leases “in order to be in line with what is now required by the law and for the King to know who you are, and to be recognised as a member of the community”.

After the 2011 community meeting, she said, “the induna’s ‘police’ went around saying that everyone must have a lease, or else there would be trouble and we would be thrown off the land”.

Naidoo stated in his affidavit that by compelling and inducing residents to sign lease agreements, the Trust and the Board were violating customary law and had assumed land administration powers they did not have.

He argued that inducements to residents to sign lease agreements on the basis of false and incomplete information were “serious, widespread and systematic” and that many impoverished people could not afford the new royal rentals.

He further suggested that neither the Executive nor the Legislature had taken effective steps to stop the “unlawful” conduct or to protect the rights of the residents and occupiers of the Trust-held land.

As a result, the applicants would ask the High Court to declare this conduct unlawful and unconstitutional and to initiate a new process for residents to cancel their leases and recover any money paid to the Trust.

“Significant income is generated for the Ingonyama Trust by such lease agreements. In the 2015/2016 period rental income was R96,130,563. There is little evidence that the revenue generated by leases is used for the benefit of communities or their material well-being.”

Naidoo also submitted that the Ingonyama Board recently reported that 95.85% of its budget had been spent on “administration”, with only a small fraction going to rural development.

Apart from the Ingonyama Trust and the Board, the applicants have also cited the Minister of Rural Development and Land Reform, the KZN MEC for Co-operative Governance and Traditional Affairs, and the KZN House of Traditional Leaders as respondents.

In his responding affidavit, Ingonyama Trust Board chief executive Bonginkosi Mkwanazi said the applicants had failed to produce cogent evidence that they were co-erced into signing leases, or that the Trust itself placed them under duress or undue influence.

If there had indeed been any coercion of residents, then the applicants should identify these parties and take legal action against them.

Mkwanazi also argued that the new lease arrangements were designed to “uplift and empower people” by doing away with apartheid-era “Permission to Occupy” (PTO) permits, and enabling people to prove land tenure for the purpose of accessing cell phones, bank accounts, voter registration or liquor licences.

He disputed that the Trust or the Board were undermining rural land tenure or “extorting” money.

He suggested that the income from residential leases was “negligible” compared to commercial leases and that claims that residents were not benefitting from Trust income were “speculative and ill-founded”.

“The Trust’s annual reports to the Minister and to Parliament demonstrate how the revenue has been and is being appropriated,” he stated.

Rendaki Sadiki, Director-General of the Department of Rural Development and Land Reform, suggested that the court order sought by the applicants would impose considerable new financial and administrative burdens on the State to survey large areas of rural land.

Responding on behalf of the Minister for Rural Development and Land Reform, the Director-General suggested that the concerns raised by the Motlanthe High Level Panel about the substantial revenues raised for the Ingonyama Trust through residential leases were not a “definite finding of fact” and were merely “inputs into policy development that are yet to be considered by government.”

However, the Minister would abide by the court’s decision to refund any lease rentals in cases where it could be proved that they were concluded without informed and genuine consent of residents.