Elderly in rural Eastern Cape struggling to register for vaccines

No smartphones, poor connectivity and a lack of transport make registering impractical 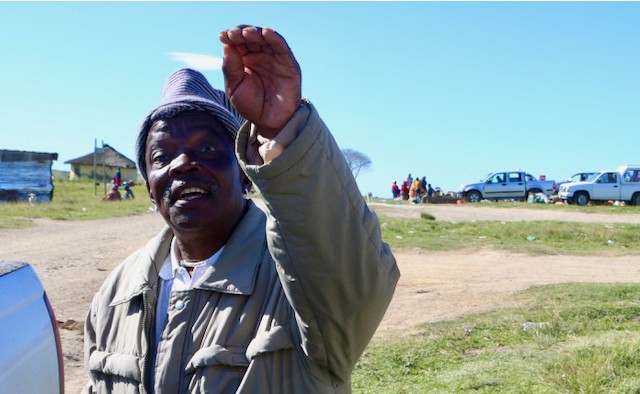 Many people over 60 and eligible for Covid-19 vaccinations in the current phase of the roll out but who live in the rural Eastern Cape are still not registered on the Electronic Vaccination Data System (EVDS).

Acting Dean of the Faculty of Health Sciences at Fort Hare Professor Leon van Niekerk has warned that unless the Department of Health alters its strategy it won’t reach its targets.

GroundUp spoke to a number of people at Xhora Mouth in Elliotdale and in Manzimdaka village near Ngcobo. None of them had smartphones. None were registered. Some cannot read, and even with an ordinary phone would not be able to read an SMS notification informing them of their appointment. In many areas connectivity is poor. Arranging travel to get to vaccine centres is another hurdle.

Gibagiba Tunana, 64, from Folokhwe, said, “I have heard about the vaccination on the radio but … I don’t know how to register myself and I don’t have anyone that can assist me.”

Nowelile Mpini, 70, said, “Services always arrive late here because we are far from everything. Maybe they will come to us when they have finished with those areas that are close to town.”

Chief Nophazamile Gwebindlala of Xhora Mouth said, “We have been spreading the word for the elderly to come and register. So far more than 100 have registered but the area is huge.”

“Some people don’t know how important it is to get vaccinated; some have heard about all the negativity and have decided that they don’t need to be vaccinated; others even argue that they have never been sick,” she said.

Sajini Mabe, 67, of Manzimdaka, said they had no knowledge of where they should register. His household has three people over 60 and they have approached a relative who is a nurse to help them.

Manzimdaka has no clinic and residents collect their medication from Elliot Hospital.

According to STATS SA’s 2019 population estimate there are about 760,000 people over 60 in the province.

Van Niekerk said, “Right now the Eastern Cape health department speaks of 173,000 elderly people who have registered … I believe that most of those are in urban areas and there are few of them from rural areas.”

“Unless the department teams up with traditional leaders, church groups and some NGOs that have resources to get into those rural areas, the majority of the rural elderly population will be left out.”

“We have over 200 students who can do vaccination in both Alice and East London campuses and we also have a campus clinic that can be used as a vaccination centre,” he suggested.

Eastern Cape health department spokesperson Sizwe Kupelo said, “No one would be left out.” He said community healthcare workers will assist the elderly. “We are going to be using schools and [social grants] paypoints, [and] in some instances clinics. When the elderly get to clinics we take their details manually to be transferred to the electronic registration system.”

On Wednesday Kupelo said, “We have dispatched a fleet of 34 vehicles to all the districts in the province to help register the elderly.”