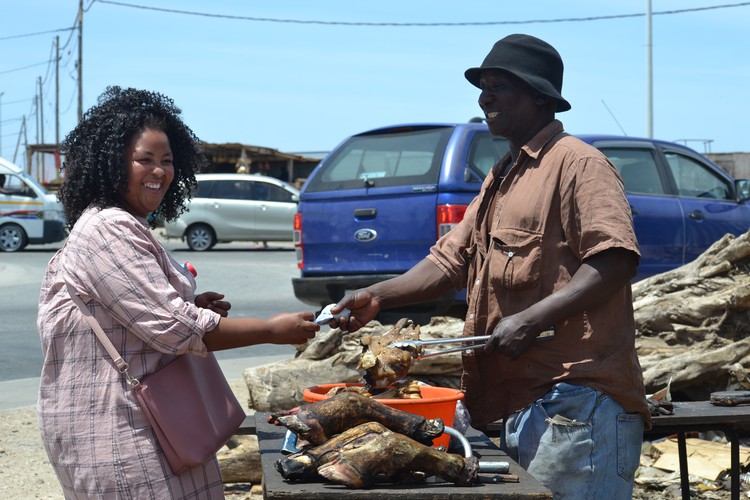 Two years ago, Thanduxolo Sixaka helped an elderly couple put their shack up again after the wind blew it down. The grateful couple passed on to him their booming meat business.

Sixaka says he was sitting in the yard of the ward councillor hoping for a piece job when he saw that trouble was looming on the corner of Kani and Koyana Streets, in Veeplaas township in Port Elizabeth. Strong winds had blown down a shack.

“The shack belonged to an elderly couple who were selling smileys, cow and goat feet and iqadidi (stew).”

“The old man was struggling to lift up a hammer to erect their one-roomed shack. His wife was staggering about holding a plank in fierce weather conditions. They were too frail … I couldn’t watch anymore.”

He put up their shack for them and the couple thanked him.

“They took out of a dish a juicy smiley and also gave me R50 in cash, saying, thank you, son.”

“A few weeks after that I got a piece job from a man who got a tender from the councillor’s office, the job of making a soccer field. Within a few weeks … my boss told me there was no more material to build the field, so I became unemployed again.”

He said he heard from people in the township that the elderly couple was looking for him.

“When I found them in their house, the elders said they couldn’t continue with the business because they were too old. They gave me the place from which they sold meat, and ever since then the place is called Rhadi’s Meat Place. Rhadi is my clan name,” said Sixaka.

Sixaka, who has three children, is grateful to the couple for making him self-employed.

“Three months ago, sadly I heard that one of the couple, the man, died and I did attend his funeral. His wife is still alive. I thank them for giving me this place,” he said.

Customer Pinky Solani says she loves buying at Rhadi’s Meat place. “My favourite meat is iqadidi and smiley. The place is a place to be for those who want good, fresh takeaways. I will always support him.”