Councillor’s promises came to nothing 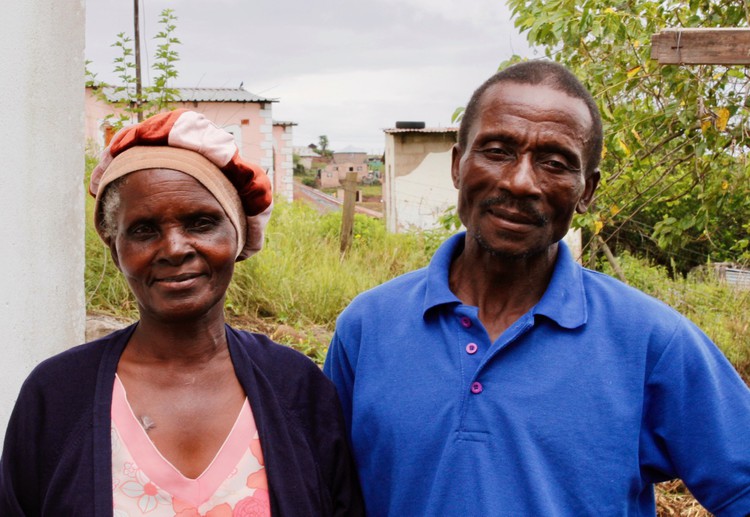 Margaret and Thembinkosi Maduna say they have lost hope of ever getting the house they were promised. Photo: Nomfundo Xolo

An elderly Durban couple who have been living with their eight grandchildren in a ruined mud house for ten years are still waiting for municipal and provincial officials to keep their promises of a new house.

A storm destroyed much of the Maduna family home in Shongweni in 2008. Now a large sheet of waterproof material covers half the house where the couple live with the children, aged between four and 24. Margaret, 71, and husband Thembinkosi Maduna, 69, say that they have lost hope of receiving an RDP house in spite of promises.

“When a huge storm came in 2008, the entire roof came off and we were forced to live without a roof over our heads for two months. This was until a neighbour donated roofing plastic, then we were able to be protected from the rain and cold,” said Margaret Maduna.

The family depends on pension money to feed the entire family. They used to earn extra money from selling recycling plastic but it is no longer being collected in the area. Margaret Maduna listed her attempts to get help.

“When I asked for help from the previous councillor after the roof had collapsed, he told me that he’d only be helping families who had lost lives. The only assistance I got was from Sassa [South African Social Security Agency], who gave me a R900 voucher.

“After the recent devastation which took away half the kitchen and the bedroom, where the children sleep, I went to the current councillor and asked for help. He came and evaluated the damage and never came back. It’s been months now,” said Margaret.

Thembinkosi said they now live in fear as anyone could enter their home.

“Our grandchildren sleep in a room made up of tent material and cannot sleep if it rains or when it is windy. It is painful to see that we cannot even provide them with a roof over their heads. Their parents are dead and they depend solely on us. You would think that the councillors or even the government would put children and elders living in poverty first.”

“We have never seen any development in this area [ward 7] since 1975,” said Thembinkosi Maduna.

“We often eat plain potatoes for dinner and with no idea where the next meal will come from.”

The local councillor, Jabulani Phewa, told GroundUp the family had been put on a housing list and would soon be receiving assistance. “A budget has been allocated for families living in mud-houses and will soon be implemented. We urge the Maduna family to be patient while the allocation is taking place.”

He could not say what the budget would be or when the project would be implemented.

GroundUp asked the KwaZulu-Natal human settlements and social development departments if projects were being implemented to replace mud houses in the area, what the budget was and when building would start. Neither Dumisa Fandesi, liaison officer for the Department of Social Development, nor Mbulelo Baloyi, liaison officer for the Department of Human Settlements, have replied to emails sent on 8 February, or to three further enquiries made to each of them.