March in Benoni in support of 4,500 workers 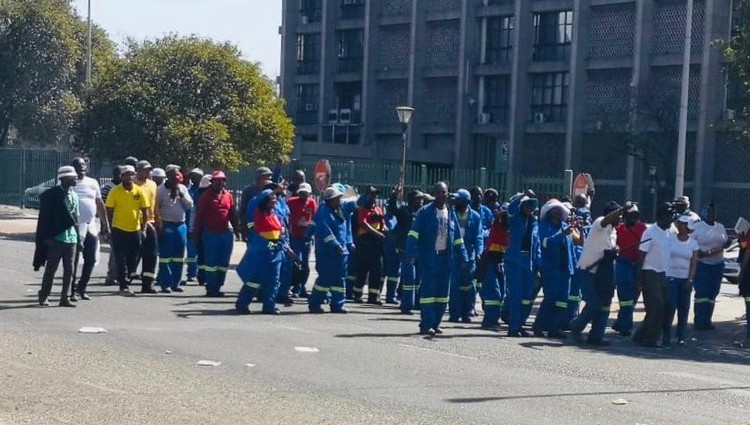 Municipal workers protested in Benoni about hundreds of millions of rands in back pay they say is owed to them. Photo: Kimberly Mutandiro

Municipal workers from depots across nine cities in the Ekurhuleni metro are demanding R810 million which they say they are owed by the municipality.

Dozens of workers demonstrated in Benoni on 2 September, claiming that 4,500 workers are owed back pay.

Some workers blocked roads with stones, spilled and burned rubbish on the streets of Benoni, bringing traffic to a standstill.

According to SAMWU an agreement was signed by SAMWU, IMATU and SALGA in April 2010. But the municipality did not pay its employees the agreed wages.

“The case dates back to 2010 when the City of Ekurhuleni decided to unilaterally freeze the wages of the employees. We tried to engage with the employer without success. We have a spreadsheet supplied by the employer in 2017 which clearly shows the amount as well as the employees who are being affected,” said Thokozani Nkosi, SAMWU’s regional secretary.

A letter sent to SAMWU by the Ekurhuleni Metropolitan Municipality’s Finance Department on 25 April 2018 appears to confirm the amount employees say they are owed. “The back pay amounts to an estimate of R810 million and the monthly operating costs will increase by an estimated R81 million per month,” reads the letter.

Thaphelo Mokoena, shop steward from SAMWU’s Ekurhuleni regional office, said a new salary scale had been introduced after 2010. “New employees are earning more than the old employees and this has created a high level of discontent.”

Mfana’fikile Samuel Zwane, who works for the City of Ekurhuleni licensing division, said that for nine years he had been paid R4,000 a month less than the agreed salary.

“What has lowered our morale even more is the fact that those who were employed after us now earn more than us. We are meant to be earning the same salary.”

The matter will be discussed on 1 and 2 November at the National Bargaining Centre in Centurion.