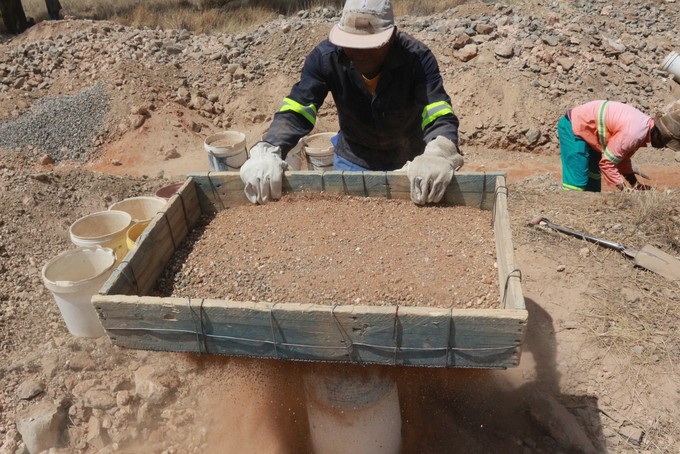 A man sifts for diamonds in Kimberley. Photo: Christopher Rutledge

“I was an armed robber. But after I was released from prison I wanted to work and provide for my family. But there were no jobs for a convict and so I ended up mining as a zama-zama,” an informal miner told me.

This zama-zama (which literally means “try-try”) is one of over a thousand desperate individuals, who manage to peacefully eke out a living from the wealthy abundance of the South African land. Their humble hope is to keep their family’s fed and clothed, even if this means working at times for months without any income, with only a shack as protection, with no access to water or to ablution facilities, all the while defending their meagre possessions from the mining companies and being harassed by the police and officials of the Department of Mineral Resources (DMR).

On the other side of the South African reality sits Marcel Golding, a director of Ekapa Minerals, which has formed a joint venture with London listed Petra Diamonds to buy out the De Beers Kimberley diamond mining operations.

Golding, the ex-Chief Executive Officer of eTV, also sits on the boards and has shares in over 40 companies including Tsogo Sun, Rex Trueform and Ekapa Mining.

As the former Deputy Secretary General of the National Union of Mineworkers (NUM), Golding has used black economic empowerment provisions to accumulate tens of millions of rands.

In 2015, Ekapa Mining and Petra Diamonds bought the De Beers Kimberley operations for R102 million in cash. The mine is expected to yield 7.2-million carats from its dumps alone. The mines also have 93.2-million tonnes of ore deposits at a grade of 4.4 carats per hundred tonnes on a total area spread over 3,981ha.

According to Mining Weekly, Ekapa Minerals expects to produce at a rate of 700,000 carats a year in the first three years, generating revenue of R920-million a year at a diamond price of US$95/ct.

The acquired assets are poised to be cash flow positive in the first year, with initial working capital of R200-million financed 100% by Ekapa Minerals on a standalone basis.

These two separate realities – one in which desperately poor, unemployed people who have not enjoyed the economic benefits of our new democracy try to survive in the economically depressed outback of South Africa, and the other reality, of powerful, multi-shareholding, spectacularly rich individuals who have abundantly benefited since the dawn of the new South Africa – seldom come into contact and yet are always in tension.

Now, Ekapa Mining and Petra Diamonds have lodged an urgent interdict in the Kimberley High Court to evict hundreds of informal miners around the Kimberly mines. Not only does Ekapa want to stop the miners eking out a living from the discarded scraps of its mining operation, it also seeks to prevent them from accessing properties that do not belong to it. Over 90% of the properties that Ekapa wishes to interdict the informal miners from entering do not belong to Ekapa.

This is an attempt to abuse the law, to use it to terrorise the miners. It might have succeeded, had the miners not been able to access legal representation from Richard Spoor Attorneys, who, acting pro bono, have unearthed a range of questionable, if not outright untrue claims by the mining company.

It is hard to see how a company such as Ekapa Mining can think its wealth is threatened by informal miners who extract an infinitesimal fraction of the millions of carats that Ekapa will reap.

We hope that the Kimberley High Court will deal decisively with such attempts by the rich and wealthy to deny the unemployed their right to work and dignity in a country that is shamefully unequal.

Despite our mining legislation making an extensive song and dance about redressing the injustices of the past, here is a clear example of legislative collusion with large scale mining to perpetuate the ownership patterns of an ugly past, and benefit a handful of well-placed politically connected individuals.

This is particularly poignant considering our history of land dispossession. Historian Emilia Potenza describes in her book “All that Glitters” how initially, diggers of all races were able to stake claims until white diggers lobbied to prevent people of colour from owning claims: ‘White claim-holders from Europe, America and Australia ganged up against a small number of Griquas, Tlhaping, Malay, Indian and Chinese claim holders. African claim holders were suspected of Illicit Diamond buying, because they spoke the same language and had similar backgrounds to many of the workers. This led to riots in 1875 in which whites attacked African or Asian claim-holders. The British authorities responded by cancelling all claims owned by blacks.’

As wealthier investors became involved claims were consolidated. By the late 1880s, De Beers, which was controlled by Cecil Rhodes, came to control most of the industry and to monopolise most of the world’s diamond market.

With this history in mind, at a Small Scale Mining Conference in Kimberley in July 2015, then Minister of Minerals Ngoako Ramatlhodi promised that the department would help informal miners formalise their operations. But the DMR has consistently failed to deliver on this promise.

It would appear that, instead of assisting the miners, the DMR in Kimberley has collaborated with Ekapa mines to bring the interdict against the informal miners. The department has not only failed to formalise the informal mining operation but has now washed its hands of any responsibility for the possibility that thousands of informal miners might lose their livelihoods and their homes.

Moreover, the department has acted with hostility to numerous requests by the informal miners to formalise their operation, and called the Hawks, who threatened to arrest the miners’ leaders.

When miners have alleged that mine security has stolen or damaged their equipment, police have failed to open cases and have instead threatened to arrest the miners laying the complaints.

It is up to us, the citizenry, to ensure that such injustices as the one unfolding in Kimberley are challenged.

The author is the Mining and Extractives Coordinator for ActionAid South Africa. He writes in his personal capacity.