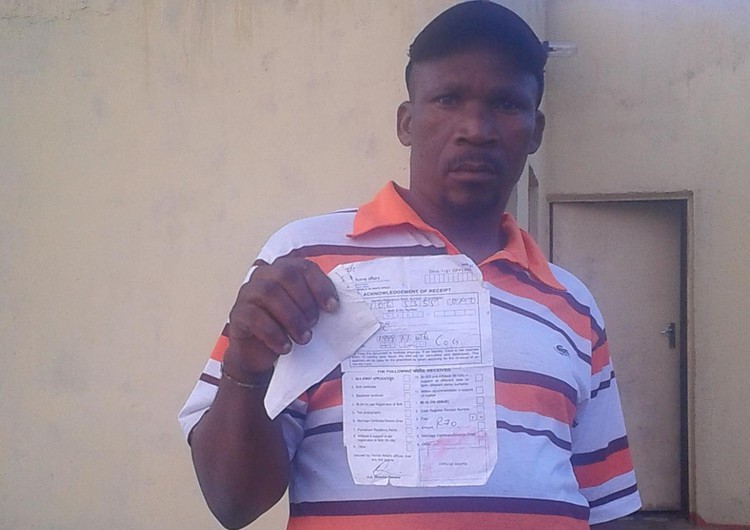 Mbhekiseni Zuma holds up a document from Home Affairs that shows he paid R70 to have a clerical error fixed. Photo: Zimbili Vilakazi

For the past eight years Mbhekiseni Zuma from Mbumbulu, south of Durban, and his wife, Nomusa, have been in and out of the Prospecton branch of Home Affairs in an attempt to have a gender mistake rectified.

Zuma had twins – Lungani, male, and Lungelo, female, in 1999. The parents were only able to apply for birth certificates in 2001 due to complications as they were born prematurely.

“When we got the certificates, they stated that both twins were male. Because we didn’t get enough education, we were unable to tell that there was a mistake, so we happily took both certificates home,” said Zuma.

He said it was only in 2010 (nine years later) that he found out Lungelo’s gender was wrong on the certificate. One of their neighbours saw the certificates and told them.

He went in 2010 to Home Affairs and applied to have the error corrected. Zuma, who is unemployed, had to pay R70. He has returned frequently to Home Affairs to find out the status of the application. “Officials told us that it was going to take only six months to a year to have the matter investigated and have the mistake rectified. But even today that is not done and each time we go checking we are told that the head office in Pretoria is still working on the matter,” he said.

“The teachers have told her [Lungelo] that she won’t be able to get her matric results at the end of this year if the mistake is not rectified soon so that it can be uploaded on the system of the Department of Education. Her twin brother has started applying for the course of his choice in the higher learning institutions and she hasn’t started doing anything because her current ID number is useless,” said Zuma.

The Department of Home Affairs provincial spokesman, Cyril Mncwabe, said, “I will check with the Prospecton branch and head office on why it is taking this long for an amendment.”