50% of learners don’t get meals when they’re not at school, says Equal Education 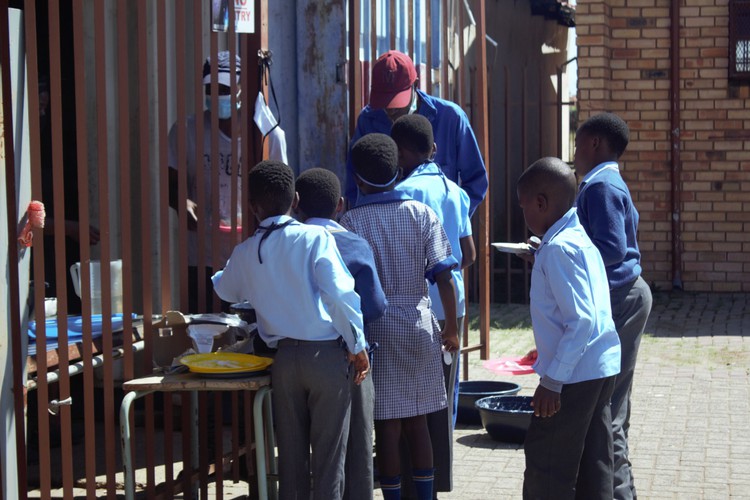 Learners at Rivoningo Primary School in Soshanguve, Pretoria queue for one of the meals they are given at school. For many of the learners, this is the only meal they will get for the day. Photo: Mosima Rafapa

Teachers and staff members in Gauteng and the North West say they are struggling to feed learners on days they don’t attend school.

Both provincial education departments have said that there is no budget to give food parcels to learners who live far from school.

In July 2020, the North Gauteng High Court ordered that the Department of Basic Education must roll out the National Schools Nutrition Programme to all nine million qualifying learners, whether or not they were attending school.

In a recent joint statement, Equal Education, Equal Education Law Centre and Section27 said “that up to 50% of learners are unable to get meals or food parcels on the days they are not at school because of rotating school time tables” due to Covid-19 measures.

The organisations called for education officials to, “provide scholar transport to all learners so that they can get meals; send a circular to all provinces communicating that learners can get meals from the school they live nearest to; and provide food parcels for learners who are not in school everyday.”

Agnes Mzamane, a school nutrition programme coordinator at Phakamonola Primary, which has 1,313 learners, said that most of their learners walk about seven kilometres to and from school. This made it difficult for them to collect meals on the days they are not at school, she said.

The school provides breakfast from 6:30 am to 7:30 am. On the day GroundUp visited, strawberry instant porridge was being served.

“Most of our learners come from poverty-stricken communities, so they depend on the nutrition programme,” said Mzamane.

Gauteng Department of Education spokesperson Steve Mabona said the province provided for at least one hot meal each day to 1,599,353 learners. He said there was no money for food parcels.

But, he said, learners could collect meals by using scholar transport buses. However at the schools GroundUp visited this was not happening.

EE’s head of research, Hopolang Selebalo, said that learners who did go to school to collect food using scholar transport would then have to wait until the end of the day when the bus returned to go back home.

Parent Sharon Sephuma, 25, has a son in grade R and she cares for five of her sister’s children. “When we near school holidays, we receive food parcels. We get milk, rice, tin fish, samp, soya, cabbage, carrots and pumpkin.”

Food parcels are mostly made up from the items left over from the school’s feeding scheme.

Feeding scheme coordinator at Rivoningo Primary, Hlekani Ngobeni, said they identify parents and learners who are most in need and encourage them to collect the parcels.

“We started this year. We have 29 classes and we only identified five learners per class. We can’t always do it because it is not sustainable because we take from the supplies of the feeding scheme,” said Ngobeni.

Mosima Mashaba from Redirile Primary in New Eersterust near Hammanskraal said all learners in the community were welcome to collect food from their school. But some lived very far away. “We have learners who live in Marikana informal settlement which is very far from us. How would they go back home if they came to collect food?” 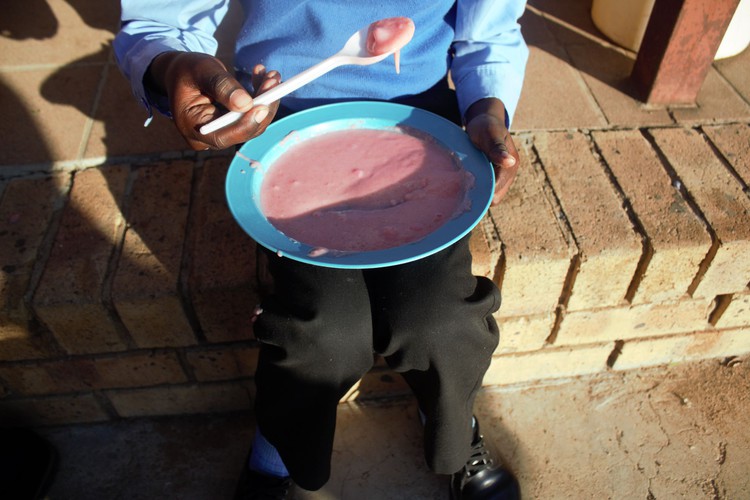 A learner from Phakamonola Primary School in Soshanguve eating breakfast at 7am. The second meal is served at 11am as part of the school’s nutrition programme. Photo: Mosima Rafapa

At Mogogelo Village in the North West, GroundUp visited four schools in Ward 11 and Ward 12. Most schools only served one meal at 10 am.

“We wish we could serve two meals. We serve meals early to accommodate the learners who have not had a meal the night before,” said a school principal in Ward 11 who did not want to be named.

School Governing Body chairperson, Elizabeth Rehlamfu, at Machakela-Mamodibo Secondary said feeding learners every day is a challenge due to poor attendance. “We tried to provide warm meals to learners who are not at school but we wasted food because only a few turned up.”

“When there are learners at school who come at the request of a teacher, then we allow them to have lunch but there is no special provision to all learners,” she said.

At Boitemogelo Primary School, two learners walked into the school yard with lunch boxes and were given meals before leaving.

Kgopotso Shibambo, a parent and school assistant, said, “We have learners come in every day. Some days, they come in large numbers and some days they don’t. It depends on what is being served on the day. Tuesdays we serve mealie-meal and sugar beans, and on Thursdays they have samp and tinned fish. Friday is also a favourite when they have pasta and soya.”

North West Department of Education, Elias Malindi said: “Very few schools have social partners who help provide breakfast. The allocated budget caters for only one meal per learner per day due to inadequate funds. There is no budget for food parcels.”

He said the total budget for the nutrition programme, covering feeding, utensils, a stipend for 4,529 food handlers, administrators, fuel and UIF, is R545,755.