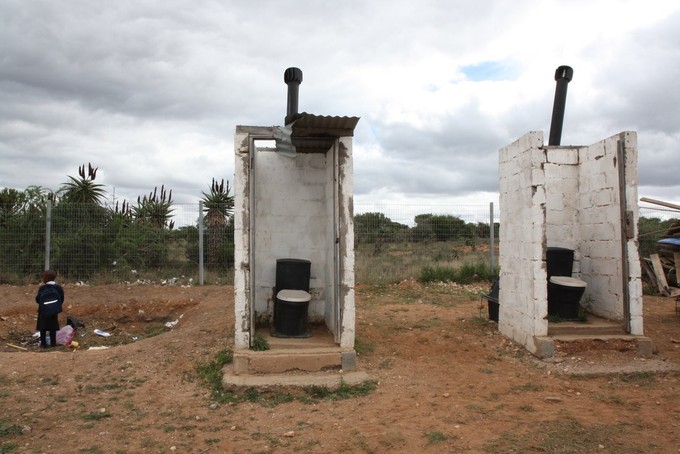 According to Equal Education, this school at Carlisle Bridge in the Eastern Cape is without electricity and has toilets built by a local taxi owner. Photo via Equal Education’s Twitter account

The Department of Basic Education says it is unlikely that all public schools in South Africa will meet the Minimum Norms and Standards for School Infrastructure by the November 29 deadline.

In 2013, the Minister of Basic Education, Angie Motshekga, published the legally binding set of minimum standards which all provincial school systems in South Africa must work toward. The document requires that every public school in South Africa have access to water, electricity, ablution facilities, security personnel, and internet. It also limits class size to 40 learners or less. The Minimum Norms and Standards require all schools to have libraries, science laboratories, and areas for physical education. Schools for special education learners must be fully accessible for wheelchairs under the provisions. The policy came about following a campaign by education social movement Equal Education.

After it was agreed that the policy would be legally binding, the national department began the Accelerated Schools Infrastructure Delivery Initiative (ASIDI) to help schools meet the new requirements and to rebuild schools constructed from harmful materials. 170 schools have since been constructed out of a targeted 510, according to the department’s records. 126 of these new schools are in the Eastern Cape. ASIDI is also working on securing water access in this region, though 55 schools still do not have clean, running water, the department said.

Albert Gumbo, head of communications for ASIDI, said most of the delays have arisen during construction in the Eastern Cape. Contractors often perform poorly and take longer than expected. Inclement weather and unpaved roads make construction difficult. ASIDI also goes through “rationalization exercises” in which the organisation negotiates with several small communities to decide the best site for a new provincial school. 215 school sites were identified using this method.

The Department of Basic Education has called the 29 November deadline “an ambitious target considering the need.”

Equal Education says the Department of Basic Education will likely break the law this November. The organisation was deeply critical of the department on Twitter this afternoon. According to General Secretary of the organisation, Tshepo Motsepe, “The impact will be dire [on learners]. People are being denied basic dignity and rights, basic sanitation.”

Equal Education said that if the department does not meet its November deadline, the advocacy group can release private information about contractors and officials who are benefiting disproportionately from ASIDI programs. The organisation also plans to mobilise South Africans on the issue this November.