Community has little confidence left in the Limpopo education department which has to provide decent sanitation to nearly 1,500 schools 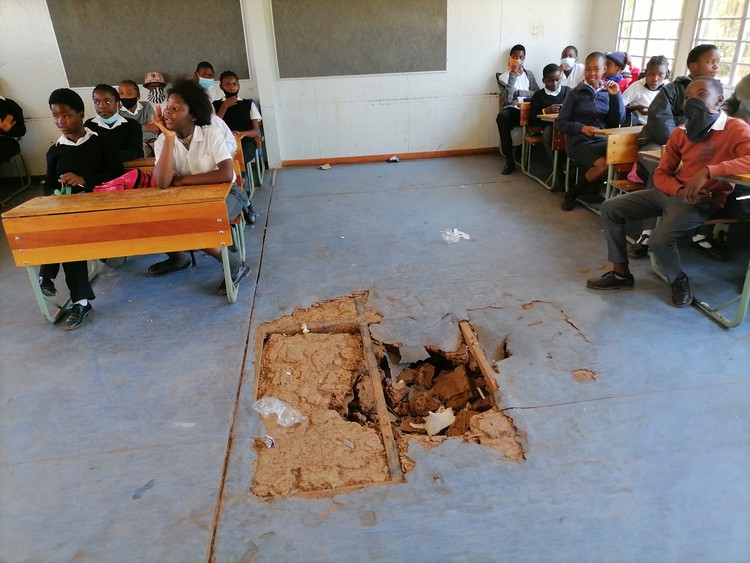 The floor in one of the mobile classrooms used by grade 7 learners is collapsing at Tshivade Primary. The school governing body had demanded that the Limpopo Department of Education fulfil its promise to build them a new school. Photo: Bernard Chiguvare

Members of the school governing body at Tshivade Primary are demanding that the Limpopo Department of Education build them a new school.

Parents say the school’s dilapidated infrastructure is becoming dangerous for learners and staff. The school is in Bodwe village and has 419 learners.

According to Famanda Khosa, the school governing body’s chairperson, the community built two blocks of four classrooms over 60 years ago. One of the blocks was destroyed by heavy rains in 2018. The same year, the department brought the school six mobile classrooms and an additional four in 2020.

The remaining block is in a terrible state, with a broken roof and windows. The floor in the mobile class used by grade 7 learners is also collapsing.

“We are running short of storage space. The department is aware of the situation yet it continues to give us empty promises,” said Khosa. “The four mobile classrooms brought in 2020 are resting on bricks since they were delivered. If it rains heavily the bricks may sink.”

Last month we reported on a court ruling where the provincial administration was ordered to provide, within 90 days, a detailed list of all schools in Limpopo with pit toilets along with plans to eradicate these.

Tshivade is one of nearly 1,500 schools still using pit toilets. The toilets are far from the taps. At the back of the boys’ toilets are four holes that used to be toilets but the structures were destroyed by strong winds. Some learners use these open holes during break times. Other learners told Groundup that they are afraid to use the toilets because of snakes.

“This is a ticking bomb. We informed the department in 2008 and it promised to build us toilets in 2011. But nothing has been done. The state of our toilets is very bad. We are worried that one day we may fall into these pits,” said Khosa.

Education department spokesperson, Tidimalo Chuene, said the department is aware and is also concerned about the infrastructure challenges at the school.