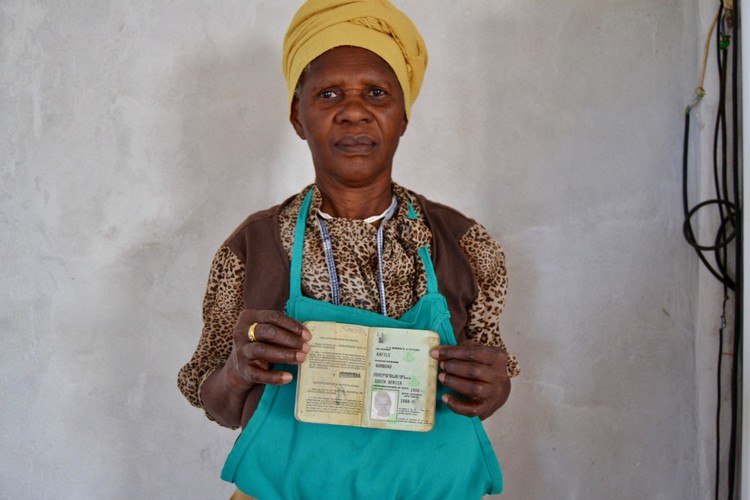 Nomboxo Kafile is 71. She says she was born on 6 June 1946, but the date on her identity document says 1966. She says she has gone numerous times to the Home Affairs offices in East London over the last 23 years to correct the date, but without any success. If she was born in 1946, she should have started receiving her old age social grant 11 years ago.

Kafile lives in a small, round house in Isilatsha Village, outside East London. Her 34-year-old daughter and three grandchildren stay with her. Kafile shares a single bed with one of her grandchildren.

“I always tell the community leaders, if they see any government official in this village, bring them to my house; maybe they can help me,” she says.

Her ID book was issued in 1988. As she had little schooling and cannot read or write, she says she only discovered the error when her daughter pointed it out to her in 1994. Kafile was on her way to vote for the first time.

“I’ve tried everything,” she says. “I knocked on all the doors at Home Affairs in East London with no luck. Instead, I lose what little money I have.”

“I was told to do another ID with the correct year of birth, which I did. I waited for three months; I went back to check.” She says the ID never arrived.

She says in early 2000, Home Affairs officials in East London told her to apply for another ID. Kafile says she did, but again the ID document never materialised. She says the last time she went to Home Affairs was in 2015. “When I got there the official who was helping me called five of his colleagues. He asked them to look at me and guess my birth year, which they did. They all said I was more than 60 years,” she says. “I told them that my first daughter was born in 1972 and the birth year they gave me means that I had a child when I was only six-years-old.”

She says officials told her to bring at least five people to confirm that she was born in 1946.

“I took my elder daughter, my husband, and younger brother, because we grew up together, and a neighbour, a church member, two community leaders. We went there and they all confirmed that I was born in 1946. I even gave them a baptism certificate I got from church [which GroundUp has seen],” says Kafile.

She says she made another application for an ID and she was told to check after a month. “It’s almost two years now. Still I have not received the new ID. It looks like I’m going to die before I get my old age grant,” she says.

Kafile’s daughter, Neliswa, works as a domestic worker. She works two days a week and the money she receives is “not enough, but we survive”. She gets a child support grant and gives this to Kafile.

“I should be the one looking after my grandchildren, buying them sweets on payday, but now I’m using their money to pay for my needs,” says Kafile.

Home Affairs Media Liaison Officer Thabo Mokgola said according to their records, Kafile applied in July 2008 for a rectification of date of birth to 6 July 1955 [not 6 June 1946]. However, no documentary proof was provided to substantiate the requested date of birth.

“In this regard, due to the high level of fraudulent applications received in such cases (where the applicant has not in fact yet reached the age of sixty years) irrefutable documentary proof must normally be provided by a person applying for a rectification of date of birth,” said Mokgola.

He said Kafile’s date of birth was indeed changed in the population register on 10 February 2016 and recorded as 6 June 1955. A new identity number was allocated to her.

He said Kafile could now apply for a smart ID card under this new identity number, which would be issued reflecting the date of birth which according to Home Affairs she requested in 2008.