An Eastern Cape mother has been carrying her disabled son on her back for 23 years. Now at last he has a wheelchair

Good Samaritan comes to the rescue 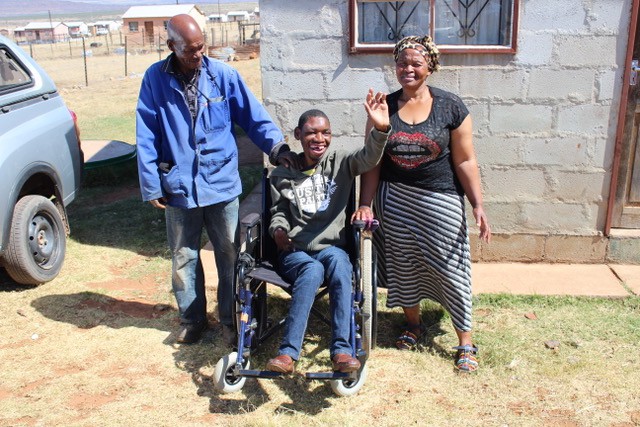 For the past 23 years, Zoliswa Simbuku from Vezinyawo in Cofimvaba has carried her son Masibulele on her back. If she couldn’t carry him, she had to pay for special transport, to take him to hospital for instance.

His mother is unemployed and could not afford a wheelchair. She has not had any contact with his father since 2001. The family rely on Masibulele’s disability grant of R1,600 a month.

Now at last he has a wheelchair, thanks to Makaya Kambi, founder and director of the Cofimvaba Advice Office.

Kambi said he saw Zoliswa carrying Masibulele in town a few months ago.

At first he thought Zoliswa was carrying a drunken man and was reluctant to help.

“I decided to stop anyway because I felt sorry for the mother,” he said.

He says he walked back to them and when he found that the young man was not drunk but disabled, he helped Zoliswa to carry Masibulele back to his car to find out more about his condition.

“I was shocked and sad at the same time. This woman has been carrying her son on her back since he was born. I felt I must help this poor mother and her son,” Kambi said.

Kambi said because Cofimvaba is a small town sometimes people have to go to Queenstown or Ngcobo.

“In rural areas most people do not know their rights, especially older people. When they come to us we refer their cases to the right offices. Most cases we deal with are for people who are given the wrong identification books - for instance some are females but the ID comes back saying they are males. Some complain about being given the wrong ID numbers, maybe their date of birth is written incorrectly,” he said.

Zoliswa said her family was very grateful for Masibulele’s wheelchair.

“For the past 23 years I used to carry him on my back. It was easy when he was young but as he grew older he was becoming heavier each year. But I had to carry him; he is my son.”

The mother of three said she had been waiting for a wheelchair from the Department of Health for years.

“I used to have stress every time I had to take him to the hospital or social development because I had to carry him on my back, heavy as he is. Sometimes I would go and ask my father to help me carry him. I always suffer back pain,” said the mother.

“That is all in the past now. I will be able to push him around on his wheelchair,” she said. “I never knew this day would come. I am happy beyond words.”

When GroundUp visited Masibulele was rolling up and down the yard in his new chair.