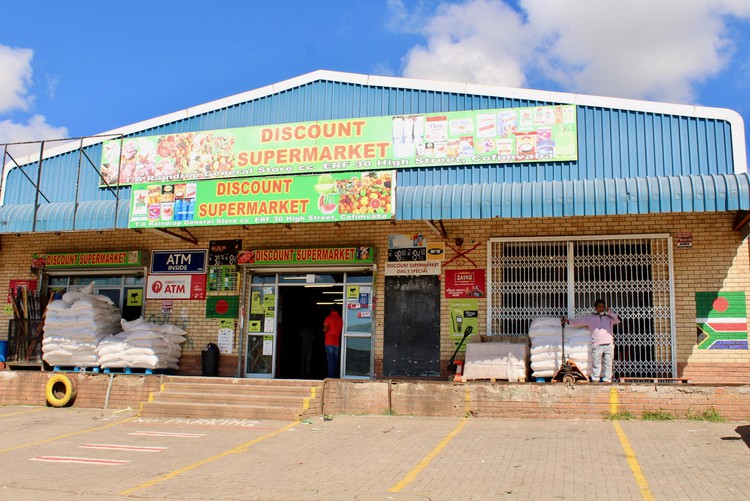 Discount supermarket business owner Ratan Mohammed said: “It was clear to me that by closing our shops, this was their way to make sure we pay the money.” Photo: Yamkela Ntshongwana

Immigrants who own shops in the Eastern Cape town of Cofimvaba say the South African National Civic Organization (SANCO), together with the Intsika Yethu Business Forum, have been forcing them to pay if they want their shops to be “protected” against xenophobic attacks.

Last week Wednesday, shop workers led by SANCO shut down all immigrant-owned shops in the town, citing a number of labour abuses and alleging sexual harassment of employees. Workers marched to the Ntsika Yethu Municipality offices singing, “Isikhalo somntana sihoye’’ (Pay attention to the cry of a baby).

Shop owners received text messages from the Business Forum Managing Director telling them that it had been agreed with SANCO that they could reopen their businesses the next day (Thursday), but requested that they release their employees on Wednesday 10 April for a “labour desk meeting”.

“Hoping that you will enjoy your business day as usual,” the message ended.

When the meeting was held workers were encouraged to join SANCO for a R10 fee. The workers elected representatives – two for each immigrant-owned shop.

SANCO acting chairperson of the Ntsika Yethu Sub-region Dyantyi Xolani Ntila said they had testimonials from workers from various shops that complained of abuses by immigrant shop owners.

“Our sisters are being paid below the minimum wage that has been passed by our government. Their working conditions show that we are now back to slavery,’’ Ntila told GroundUp.

He said he had personally witnessed mistreatment. He said if action wasn’t taken, “We will shut down all foreign shops from all villages to the ones in town.”

But a number of immigrant shop owners told GroundUp a rather different story.

Discount supermarket business owner Ratan Mohammed said, “It was clear to me that by closing our shops, this was their way to make sure we pay the money.”

He said Ntila had delivered a form to join the Intsika Yethu Business Forum to his shop in person. Ratan paid the membership fee of R300.

At a meeting at the municipal offices with SANCO and Intsika Yethu Business Forum officials, Ratan said he was told he has to pay R100 a month.

“They made it very clear that I have no choice in the matter. They said joining the business forum will guarantee me protection from xenophobic attacks. What I do not know is where are these attacks they were referring to? Because we were never threatened here and we are not even aware that there are people who want to attack us,” said Ratan.

Ever since 2006 when he began operating in Cofimvaba with his five cousins, Ratan does not recall any xenophobic threats.

“It’s only us [immigrants] who are being targeted,” Ratan said. “Shops like Spar and Boxer stores were open … Is it because we are foreigners and that they know we have no one to protect us?”

He said last week’s closure had cost him thousands of rands.

GroundUp asked Ntila what xenophobic attacks he was referring to. He said: “As SANCO, we received a number of complaints from workers about how they are mistreated in these shops … By the way these shop owners mistreat their employees and customers. Anything can happen and we do not want to see ourselves faced with xenophobia here.”

Ntila said there were allegations that workers had money deducted from their wages when they went to the doctor. He said a female employee had said she was forced to have sex with her boss. When asked for more details, Ntila said she was no longer working and he could not provide details about this incident. He said GroundUp should contact the woman directly.

The shop owners GroundUp interviewed said they were unaware of these allegations. Arif Mohammed said, “SANCO says our workers are complaining that we are bullying them … In that case, we were supposed to be given a chance to say our side [of the story] before they take such an action of ordering us to pay money and [then] still close down our shops.”

Arif viewed the march and shut down as a response to immigrant shop owners refusing to pay up. He had not signed the membership form, but after the shops were closed last week, he paid the R300.

“We pay rent here every month and we also have employees to pay. For them to take our employees by force is really not working for us,” said Arif.

Mhlambiso said the goal was to integrate businesses in the area and this would “avoid the attacks on the foreign nationals”. He further said: “Our working together is going to allow our businesses to interact for the benefit of local businesses … We’ve had a meeting with them. They are happy members, but as you might know this is a new concept even to us.”

However, the five foreign shop owners GroundUp interviewed said they were unaware of the meeting.