Taxi association denies use of violence 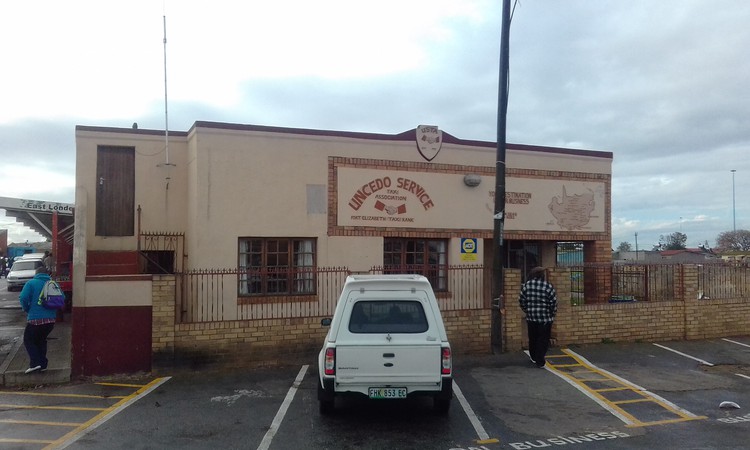 The Njoli taxi rank in Zwide where hitch-hikers are forced to go and get Uncedo taxis to their destinations. Photo: Joseph Chirume

Hitchhikers in Eastern Cape say they are being attacked by taxi operators who force them to use their taxis instead of hitchhiking, which they say is cheaper.

Road travellers in Port Elizabeth accuse members of the Uncedo Taxi Association of chasing them away from popular hitchhiking spots or forcing them to go to Njoli Square taxi rank in Zwide, used for long distance journeys by the association.

Nomalanga Mpongoshe, 24, said she was forced to abort her trip on Wednesday to East London after she was slapped in the face by a taxi operator who was in a group of about five men. “I was hitchhiking along the Addo Road in Ikamvelihle when a white Toyota Venture pulled up next to me. Two men came to me and told me that I had to go to Njoli taxi rank where their taxis operate from.”

“It costs R160 for a single trip by taxi to East London. I explained to them that I didn’t have that amount. It costs less than R100 to hitchhike the same journey. The men became angry and started loading my two bags onto their vehicle. One of them slapped me in the face as I resisted. I didn’t report the incident to police because some passers-by told me that the taxi operators were violent and notorious for beating up hitchhikers. I didn’t have the money so I aborted the journey.”

Nomsa Nkala, 36, said she was going back to Cradock after spending the weekend in Port Elizabeth. She said she was also chased away from the Truck Inn in Motherwell where she had gone to hitch-hike. “The taxi operators, who were in a Toyota Venture identified themselves as from the association The car was also visibly branded.They told me that I had to pay R150 in order for one of them to transport me and my luggage to Colchester where I could hitchhike.”

Nomsa said she did not have the money. She said it costs R70 to R90 to get to Cradock by hitchhiking, and Uncedo Taxi Association did not operate on that route.

“I told them that I didn’t have enough money but they could not understand my plight. Another hitch-hiker advised me to wait until late in the night when the taxi operators are gone. I got transport at about 9pm,” she said.

Uncedo Taxi Association’s Qwabe said it was not true that his members used violence. “Our members are trained to deal with passengers as well as hitchhikers. They know what to say and we don’t use violence when removing people from hiking spots.”

“We invested heavily in this industry and we are committed taxpayers. We cannot encourage hitchhiking because it’s destroying our business. We registered our taxis. Our drivers are trained and we pay insurance money as well as for operating permits. We can not allow hitchhikers to destroy the taxi industry. We are busy engaging with the mayor to find a lasting solution to this problem.”

Nelson Mandela Bay Municipality spokesperson Mthubanzi Mniki said: “If in the process of picking up a passenger a motorist breaks the law (either by stopping in a no stopping area, parking in a no parking area, transporting passengers for profit without a licence) the traffic department, metro police and law enforcement officers can either issue a fine or arrest the transgressors. Patrols are done on all the major roads more especially those known to be notorious for such activity. In the area of harassment of people by taxi people, harassment is a criminal offence.”

Police spokesperson Captain Andre Beetge said hitchhiking was not prohibited in South Africa though traffic laws did not permit it on national freeways.

“Hitchhiking is legal. Assault is not. Taxis forcing people that wish to hitchhike to go and use their taxis is intimidation, which is also illegal. We used to get such cases at Swartkops police station, a long time ago. But complainants still have the right to open cases of intimidation or assault when those occur,” Beetge said. “Hitchhiking may not be very safe, but no law prohibits it. Some municipalities have by-laws prohibiting it in specific demarcated areas, but other than that nothing can stop someone asking for a lift. It’s up to drivers to stop or pass.”