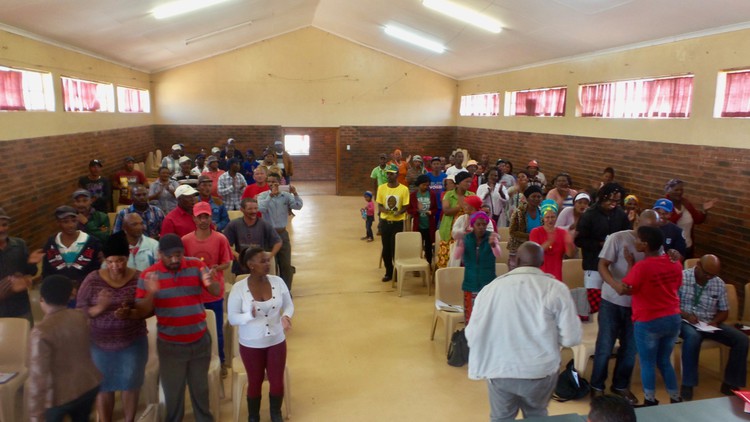 Farm workers in Eastern Cape accuse the Department of Labour of doing very little to inspect farms and enforce the law.

This and other complaints were voiced when about 80 farm workers gathered on the weekend in Dan Sandi Community Hall in Patensie. The meeting was arranged by the Kouga Farmworkers Reunion and the Eastern Cape Department of Labour. The Sundays River Workers Forum and the Western Cape-based Commercial, Stevedoring, Agricultural and Allied Workers Union (CSAAWU) also attended.

Thuso Manene, of the Sundays River Workers Forum Paterson office, said, “Our members are facing numerous challenges in and around Paterson … We are experiencing an unprecedented number of farm workers who have been unfairly dismissed from their work and walked home without any benefit.

“As if that is not enough, these workers struggle to access their UIF from the department. Workers are struggling to get benefits from their deceased relatives’ pension funds. Many people who got injured at work have been sent from pillar to post by officials of the department. Some ended up dying without getting their compensation while others have given up on their cases saying they no longer have faith in the department.”

“Many people are having their UIF applications rejected or delayed. Workers spend money and time going to Port Elizabeth to seek clarification. Even there, we often hear stories of department officials who are arrogant and dismiss workers without assisting them,” said Manene.

Zoliswa Ntlanjeni, who works on a farm in the Sundays River, told the meeting, “The husband of my friend, Buyiswa Mbetha, died in December of 2007 after his shoulder was severed by a machine while he was spraying pesticides. Buyiswa hasn’t got any compensation for that. To make matters worse, she was evicted by the farmer from the house she was staying with her late husband.”

Timothy Mbinza, who works on a farm in Patensie as a driver, said, “We work for five weeks and get paid for four weeks only. The farmer told us that he would give us backpay. I have been working on that farm for ten years and we have never been paid the promised backpay for the fifth week worked. We are angry with the department because we reported this several times, but they have done nothing.”

Buyelwa Kota, of the Kouga Farmworkers Reunion, said, “When it is off-season, farmers stick to the hourly rate and cut the number of working hours to the disadvantage of the worker. This changes when it is harvesting season, when farmers embark on an incentive system that is very confusing and leaves workers at the mercy of foremen who judge the quantity of products brought by each worker.”

An official from the Department of Labour, who said he was not allowed to be quoted in the media, told the workers that he would start inspecting farms soon. He said the Gamtoos River and Sundays River Valley areas were priority areas.

He said, “We sincerely apologise for what has been happening to you. We are beginning inspections and enforcing the labour laws in these areas. We listened to you and feel like we are not doing what we should be doing. We are here to protect the vulnerable people. We are going to attend to every complaint you raised.”

Trevor Christians, CSAAWU secretary general, said, “The law that requires inspectors to inform employers ahead of their visit is not good. The government should revisit that law and change it. Also inspectors should interview more than the prescribed minimum of two workers per site. They should choose the workers themselves rather than the usual system where an employer brings the two workers.”

“The farmers are organised. If they speak to government, it listens … The reason the employers don’t listen to us is that in their mind we are weak and cannot do anything. We must be united across all the provinces. The farmers should know that we are coming after them.”

Sharlene Mathews of EC AgriSA said, “I cannot comment on cases where there are no names of the farmers and employees affected, but farmers know the process of evicting people and its consequences if wrongly done.”