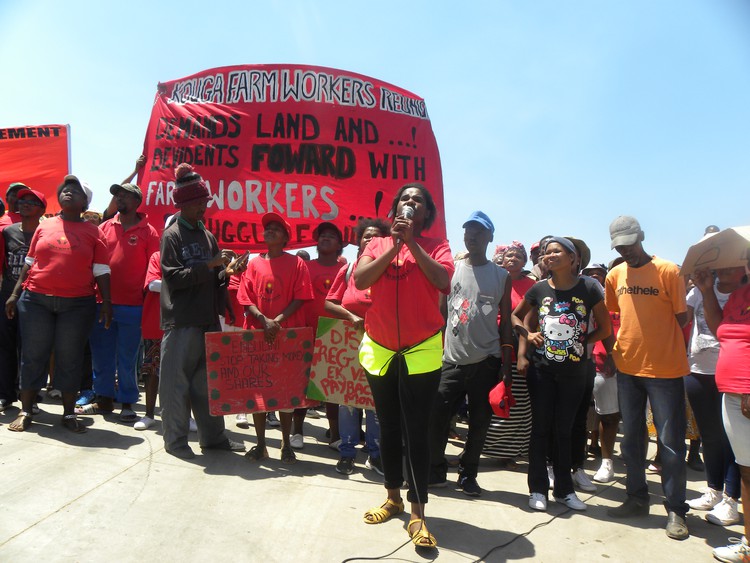 Farm worker, Buyelwa Kota, leads her fellow workers in a march to Endulini Fruit Farm in Patensie on Saturday. They have accused the farm owner of failing to pay out workers who expect to benefit from the company’s share scheme. Photo: Joseph Chirume

On Saturday, about 100 farm workers and their supporters protested at Endulini Fruit Farm in Patensie, Eastern Cape, and handed over a list of demands to managers. The farm is a leading fruit exporter.

Among their demands was a call for higher hourly wages as well as concerns with the company’s share scheme for workers. Joined by a large police escort, workers from Kouga, Addo and Kirkwood sang and marched several kilometres through the streets of Patensie. They then handed over a petition with 14 demands.

One of the march organisers, Msingathi Mbandana, said one of the main issues at Endulini started in 2000, when the farmer entered into a share scheme with certain workers.

“This was conveniently done in order for the farmers to get land from government at a discount, purporting to be promoting black empowerment. They also got water rights and other benefits,” he said.

Mbandana said the property acquired by the farm owner was developed into prime agricultural land. “The workers whose names he used to get that land and water rights are living in poverty. They don’t even know how much their dividends are because they are not allowed to see the company’s financial statements,” he said.

He said some workers are given R2,000 a year but after they complained recently, trust members started receiving R3,000, he said. Mbandana said workers suspected that the scheme was being mismanaged and want to hire an independent auditor to investigate.

Freddy Grootboom worked for Endulini Farm as a driver for 14 years. He left the company in 2006 for other employment prospects. He said he was one of the original 50 shareholders in the company.

“I never got anything from the start. Some people were getting a few thousand rands but when I enquired they always told me to be patient. I left in 2006 and have since come to ask for my money on several occasions,” he said.

“I would like my shares for all those years they did not pay me. The farmer should explain to us how the dividends are calculated and paid.”

James Pentse said he injured his leg while working at the farm in 2010. “Endulini managers told me not to come back to the farm. I have been trying to get compensation for the injury but to no avail,” he said. “I was also a shareholder in the farm but they said my name is not in their system. How can my name vanish when in 2007 I was paid R2,000 as dividends from the same scheme?”

Pentse said he was forced to hire a lawyer to get the company to pay his wife’s scheme benefits after she died in 2016.

At the end of the march, the group handed their petition to Endulini farm manager, Charl De Fin. Endulini was given seven days to respond.

GroundUp contacted Endulini on Monday and was told to call De Fin on Tuesday morning. On Tuesday, GroundUp was again told that De Fin was not available and would return our call. De Fin had not responded to calls or emailed questions by the time of publication.

Endulini has not responded to our request for comment. However, the company has laid a complaint with the press ombudsman against this article. The response from Endulini is taken from this complaint.

Endulini denies the claim by Mbandana that it got land at a discount from government. It said it purchased “existing farm businesses”.

Endulini said, “Unfortunately from time to time employees have been dismissed from the service of Endulini for good cause (uniformly after proper disciplinary proceedings have been followed and in many instances after the matters have been further adjudicated in the CCMA) and consequently have also been removed as beneficiaries.”

“Mr Pentse was never a beneficiary of the trust. His leg was injured over a weekend whilst he was at home. He wanted Endulini to submit a fraudulent claim to the Compensation Commissioner for an injury on duty. Endulini Farm refused to do so.

“The statement that Mr. Pentse was forced to hire a lawyer to get the company to pay his wife’s scheme benefits after she died in 2016 is devoid of any truth.”

Correction: The article initially misspelt De Fin as Defin and said he was the general manager when he is a manager.