SAMWU calls for workers not to vandalise property during strike 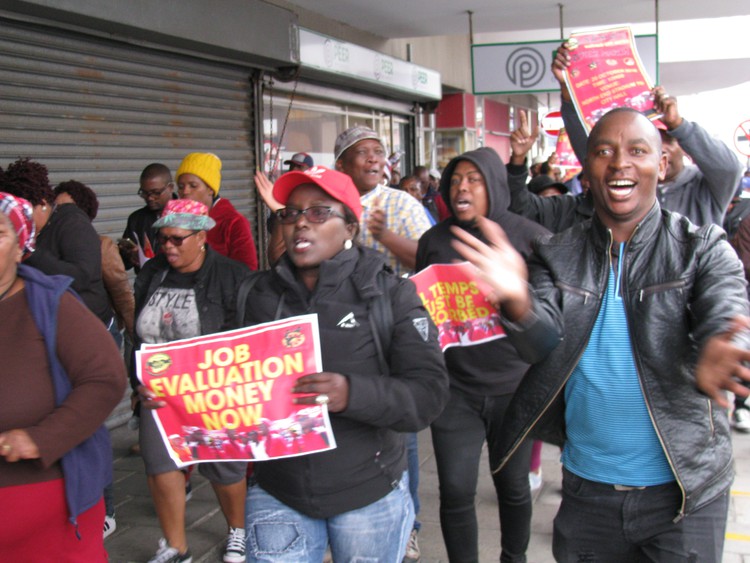 Municipal workers in East London and nearby cities have been on strike, calling for permanent employment of temporary workers and an improvement in their working conditions. Photo: Chris Gilili

Buffalo City Metro infrastructure was vandalised over the weekend, amid the strike by members of the South African Municipal Workers Union (SAMWU). On the weekend the Braelyn Learners Licence Traffic Department was burnt, and has been closed for now. The Quigney Electrical Power Station was also burnt.

The water and electricity supply in Mdantsane has been disrupted for over a week. City Spokesperson Bathandwa Diamond said, “Water pumps and electrical boxes were damaged in Mdantsane which has caused a delay in supply since last week. But currently talks are still ongoing. We will know maybe by Wednesday if the strike continues, or it will end.”

The striking workers are demanding permanent employment of temporary workers and an improvement in their working conditions.

In a statement released over the weekend the Metro said, “The Buffalo City Metro sends its sincere apologies to its residents, visitors and business community for the unfortunate events that have been taking place since Tuesday afternoon.” The statement described the strike, which has been taking place in King Williams Town, Bhisho, Mdantsane and East London, as “illegal”. It blamed “acts of anarchy” for “sabotaging of services to our people”.

The statement said: “It is our plea that the municipal workers who feel that they are exercising their right to protest should do so within the labour laws and should not infringe on the rights of others. Throughout this process, we have been negotiating in good faith with the recognised union leaders, despite the wildcat strike that is not protected as there has not been any dispute declared.”

The statement further explained that negotiations are still ongoing between the municipality and recognised union leaders, with the hope of resolving all the issues. Strikers include garbage collectors, firefighters and security guards working for the municipality.

SAMWU’s campaigns organiser Zola Capucapu distanced the union from the allegations of violence. “We have advised our member to stop with any vandalism of municipal property. If anyone is found to be involved with any form vandalism in the name of SAMWU, the law must take its course.”

He said the that the union met with Mayor Xola Pakati and the provincial leadership of the ANC on Sunday. He said there would be a further meeting on Monday. By Tuesday “we can confirm if the strike will continue or not”.