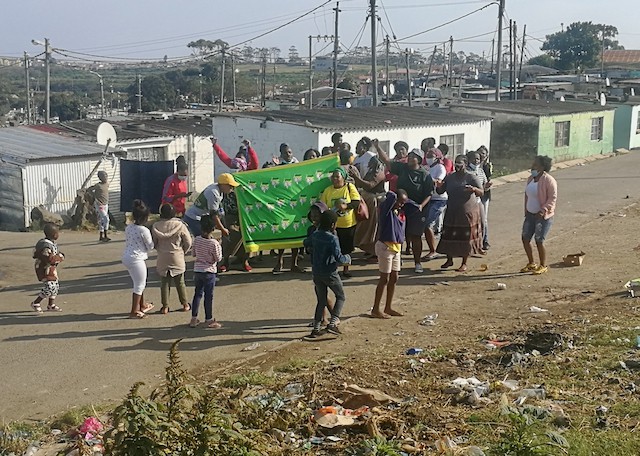 An unpleasant smell greets you as you enter sections of Duncan Village outside East London. Sewage runs down the streets. The community has designated certain areas for waste, but the wind often blows rubbish around the residential area.

Residents throw their bathing water out on the street.

On Tuesday about 20 residents gathered to march and chant slogans against their ward councillor. They want her removed from office in the upcoming local elections.

Buffalo City Metro officials take forever to fix sewage leaks when they report them, says Zukile Mtotywa, a ward committee member for D section. She told GroundUp, sewage is a problem throughout the metro but in this area “it will take days or weeks for them to come and fix the problems”.

Mtotywa also said they are not provided with rubbish bags.

Resident Nomvulo Dumile said, “The municipality can keep this place cleaner if they can provide the community with rubbish containers but it must be collected regularly.”

“The issue with places such as Duncan Village is that refuse is collected today, and two days later again there is a pile of refuse, and most of the houses do not have big yards so they will put out rubbish outside of their homes,” said Ngwenya.

Ngwenya blamed vandalism of infrastructure for recurring sewage problems. He said the water and sanitation department was “working around the clock”.

He said the main problem was high population density and congestion which put pressure on the infrastructure when “trying to accommodate all the informal settlements in the area”. The answer, Ngwenya said, was to de-densify the area.