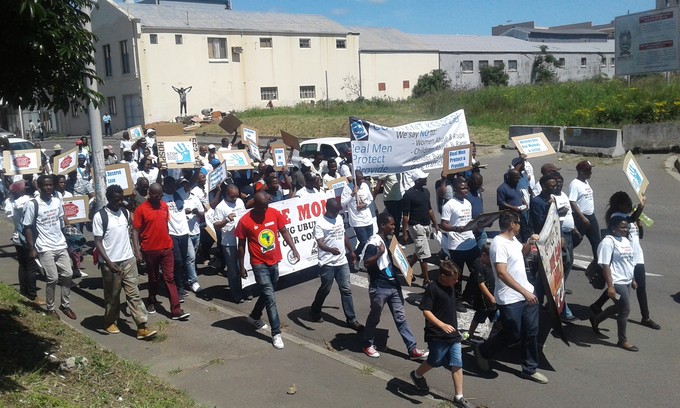 Men marched in East London at the weekend to protest against the abuse of women and children. Photo: Siphokazi Vuso

About 500 men took part in a march in East London against crime and the abuse of women and children on Friday.

In preparing for the march, 100 homeless men removed all advertisements for abortions and penis enlargement on the walls of buildings.

Mbulelo Ngceza, who was part of the campaign to remove the advertisements, said the stickers were misleading. He urged the municipality to enforce bylaws against people who kept putting up the stickers.

The men’s march went down Oxford street to the East London City Hall chanting “real men don’t rape,” and “real men provide and protect,” to hand over a memorandum asking for support from the Buffalo City mayor.

The mayor was not available but Xolani Witbooi from the mayoral committee received and signed the memorandum. He said the municipality was ready to help.

“When we are united like this we will be able to find where the problem lies and arrive at a solution,” he said.

The march was organised by Man on a Mission. Founder Thabo Mkhencele said the movement tried to empower men through training and mentorship on how to be a good man, father and husband.

“If every man can take responsibility, we won’t have the issues that we face in our communities,” he said.

Japhta Maaram said he took part in the march because it was time men stood up against violence against women, young and old. “We also want women to join in these programmes because it is also time to raise their voices,” he said. We won’t reach our goal if we don’t stand together.”

Mbasa Nogwina said by joining the march he was encouraging other men to protect women and children.

Mandisa Hadebe, one of the women who joined the march, said the women were supporting men standing up against women and child abuse.