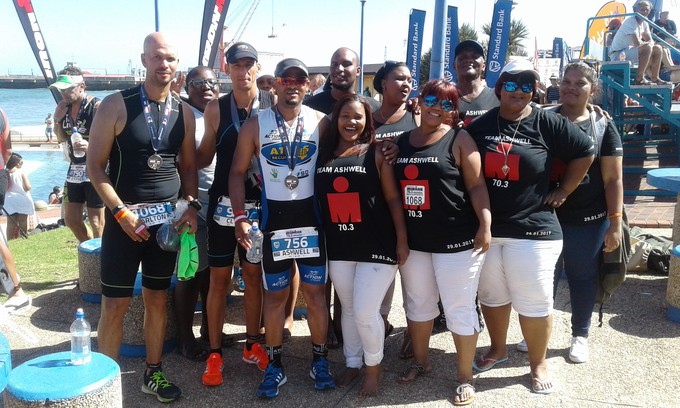 Ashwell Isaacs, who took part in the Standard Bank Ironman 70.3 mile event on Sunday in East London, with members of his family. Photo: Siphokazi Vuso

Busisiwe Sintili, 27, lives in Duncan Village. She says she never misses a running race in her home town. But on Sunday, when the 10th edition of the Standard Bank Ironman race took place in East London, Sintini could only watch: she does not own a bike and she cannot swim.

The event consisted of three parts (denominated in miles): first a 1.2 mile (1.9km) swim in the ocean off East London’s Orient Beach, then a 56 mile (90.1km) cycle, and finally a half-marathon run (13 miles or 21.1km). In all it’s a gruelling 70.3 miles (113.1 km). The SABC reported that the men’s event was won by Frenchman Romain Guillaume and the women’s event was won for the seventh consecutive time by Jodie Cunnama from the UK.

“There are no public swimming pools in my township where I could learn to swim and I don’t know how to ride a bike because I never had one,” said Sintili. “Running is better because you don’t need much. Running can be hard though sometimes. Where I live you can get robbed or raped, so I can’t train in the evenings.”

Sikelela Kakele, 25, from Mdantsane works as a seasonal lifeguard. He is also a volunteer instructor at a local gym. He finished the Ironman event, but described the difficulties he has participating in these events: “One of the challenges I have is with training. I should be on a special diet in order to perform well in every race but I can’t afford it. As a result I had cramps throughout the race,” he said. This is the third time he has competed in the Ironman.

Although he is part of the Buffalo City triathlon team that is sponsored for every race, he says the money is not enough. “It helps a lot with with putting us in the race, paying the registration fee, giving us a bike and a wetsuit. But the rest you have to figure out for yourself. More should be done especially for athletes like me who are unemployed,” he said.

Bulelwa Buso came to support Kakele. She said she wished there were more sponsors in schools and townships “where underprivileged young people who love to be part of this can be assisted.” Parents and teachers should encourage young people to participate in sport, she said.

Siya Daweti, 21, from New Brighton, Port Elizabeth also finished the Ironman. He said if it weren’t for his team who helped him get a bike and offered him transport to East London he wouldn’t have been able to take part.

Buffalo City Municipality told GroundUp it has established a new sports development office. The mayor’s spokesperson Ayabulela Ngoqo said the city was working with communities, schools, and clubs to develop sports in townships and rural areas.