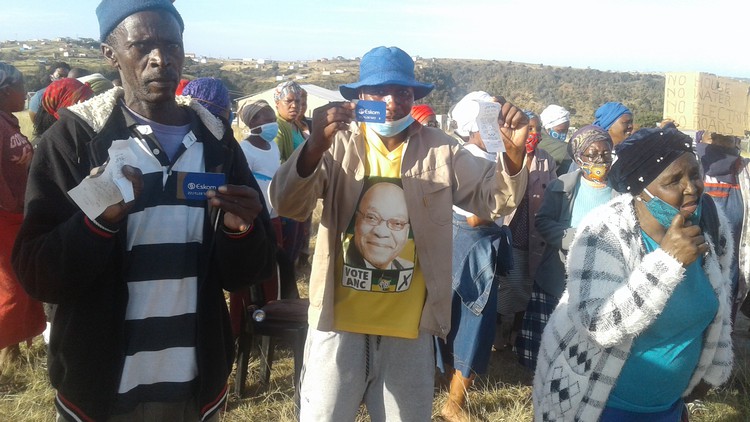 Cuba residents Camagu Mangcaka on the left and Thulisile Nyubuse show off the cards they have been using to buy electricity. Now the East London community has been given until Monday to remove illegal connection in the area before Eskom workers return. Photo: Nombulelo Damba-Hendrik

The community of Cuba location near Mdantsane, East London, say Eskom has given them until Monday to disconnect a string of illegal connections in the area.

Residents held several protests since Tuesday by blocking the road near Mount Ruth with burning tyres to stop Eskom workers from accessing Cuba.

On Wednesday, residents visited the office of ward councillor Pumla Yenana, but she was not there. The next day, protesters sent representatives to strike a deal with Eskom workers.

According to them, Eskom has given them until Monday to cut the illegal connection on their own.

The residents told GroundUp that two residents bought themselves two transformers, R33,000 each, from Eskom in 2018, after living nearly 20 years without electricity.

That same year, Eskom began connecting a few households situated closer to the road. Most households were left in the dark and Eskom had promised to return, they said.

In 2019, the community asked one of the residents with a transformer if they could tap into his connection and he agreed. They said they were told to buy electricity poles, power lines and Eskom electricity boxes.

Some residents said they paid R5,000 for the connection, while others paid up to R8,000. Those who were connected were given Eskom cards to use to buy electricity.

Community leader Thulisile Nyubuse said they were shocked when Eskom came to remove their wires because they thought their connections were above board.

Nyubuse said they have been begging the Buffalo City Metropolitan Municipality to assist them with electricity since 2006. “Councillor Yenana has been promising us electricity but that never happened,” said Nyubuse.

“Most people here have been relying on generators for electricity meaning they had to buy petrol and we know the petrol price was very high in the past years,” he said.

Another community leader Camagu Mangcaka said he was part of the group sent to negotiate with Eskom on Thursday. He said Eskom officials told them that the few households with electricity were never meant to be connected.

“If they can make such mistakes, why do they not make another mistake and electrify the whole community?” he asked.

Mpondwana said because the land in Cuba was not owned by the municipality, it was hard for them to arrange to electrify the area.

He did not answer questions about claims made by the residents.