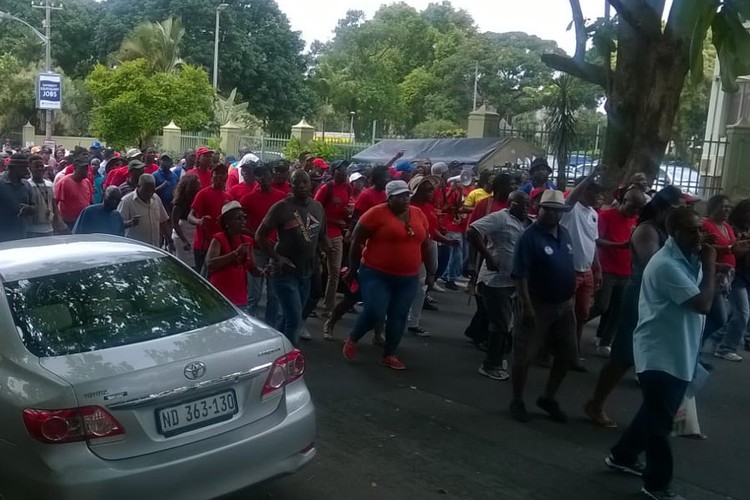 Employees at the Durban University of Technology (DUT) who went on strike on Monday morning have vowed to continue with it until their demand is met.

They found the office of the institution’s Vice-Chancellor, Professor Thandwa Mthembu closed when they went to hand him a memorandum. They are striking for an annual salary increase. The workers are asking for 10%, but the university is offering 4%.

The chairperson of Nehawu, Mike Mbatha said they won’t go back to work until Mthembu told them when they would get their increase.

“We have been fighting this since late last year yet we are still being ignored. Normally annual increase talks at the DUT are held in the middle of every year. But this time we had to approach the CCMA after fruitless meetings. And that’s why we ended up going on the streets,” said an employee.

Mbatha called on Mthembu to treat the matter with urgency.

Students who were accepted by the institution last year and had come to conclude their admission process were affected by the strike. Parent Nomkhosi Siwela from Nongoma, in the north of KZN, had accompanied his son Mvelo Siwela,18, to DUT. He said they had spent their last cent to come to Durban yet they could not get the assistance they were looking for.

“We don’t know what to do now because we don’t have relatives here in Durban. From what we hear the protest is far from over. We don’t have any other option but to go back home. We are hoping someone will help us with taxi fees when we come back again,” said Siwela.

Communications Manager at DUT Noxolo Memela said the institution had not concluded its 2018 salary negotiations in time for implementation on 1 January 2018. “After several meetings the parties met at the CCMA on 15 December 2017 where the CCMA issued a strike certificate as parties had reached a deadlock. DUT management remains committed to resolving this impasse as soon as possible particularly because this is a critical time of the year for the university. The university wishes to apologise for the inconvenience that the current industrial action may cause for students, parents, staff and other key stakeholders,” said Memela.