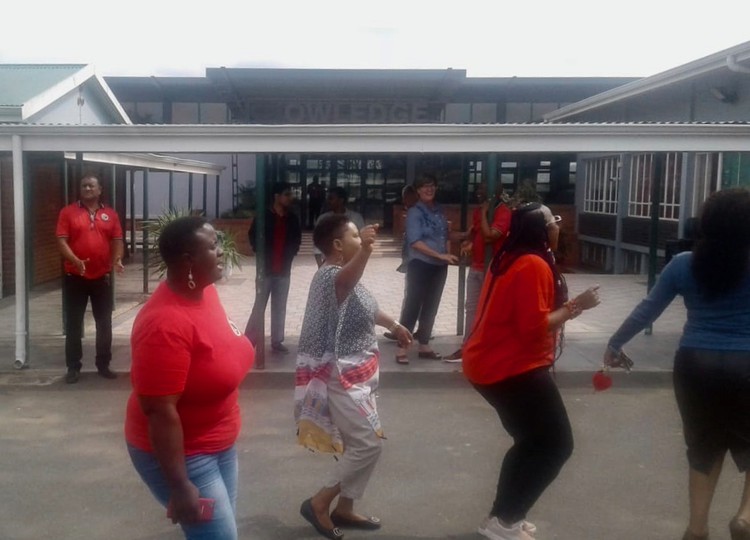 Teaching and learning was stopped on Monday at Carrington Heights Primary in Glenmore, Durban, by protesting leaders of the Simunye branch of the South African Democratic Teachers Union (SADTU).

They demanded that the KwaZulu-Natal Department of Education suspend and investigate the school principal for allegedly sexually abusing female teachers. He is accused of summoning women teachers to his office, forcing them to undress, then touching and kissing them.

Karabo Ramatholo of the Simunye branch said, “We only found out about the matter last Wednesday when one of the victimized teachers forwarded us an audio clip describing everything that the principal is doing to them.”

On Thursday the SADTU members demanded a meeting with the women staff at the school. While they met with the teachers, the principal told them he was diabetic and had to go out to get something to eat. He has not returned to the school, she said.

Ramatholo said teachers told them the principal would first show his victims photos of other teachers who had previously stripped for him. They said the abuse has been ongoing for several years. Teachers had made anonymous reports to the district but nothing happened.

“That’s why we decided to act … We are going to follow through until we see justice,” said Ramatholo.

GroundUp tried the principal’s cellphone but it has been on voicemail.

District official Themba Mthembu, who went to the school to address the protest, said MEC for Education Mthandeni Dlungwana had been notified and would visit the school on Tuesday. “The principal was supposed to be suspended before schools reopened last week. We are yet to investigate why it never happened,” said Mthembu.