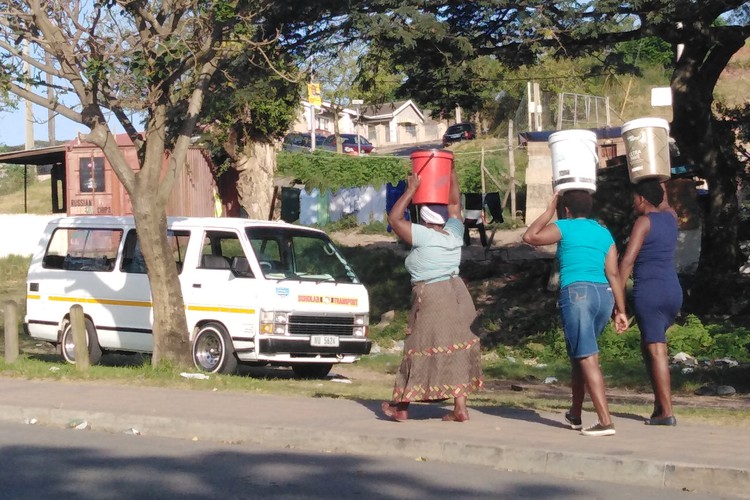 Residents of Clermont township have had to carry water long distances since the municipal workers’ strike. Photo: Musa Binda

Workers are demanding promotions and an increase in salaries from R6,000 to R20,000 per month. The demand follows their discovery that the municipality has been preferentially promoting members of the MK Military Veterans Association (MKMVA). The strike is unprotected.

Meanwhile residents are complaining that the strike has left them without water and electricity. The municipality has alleged that protesting workers have tampered with reservoirs and power stations.

Nomusa Langa, who is 55, lives in Clermont township in the west of Durban. She said residents have been without water and electricity for the past few days. She said she is furious that residents are having to pay the price for a dispute they have nothing to do with.

“I am old. I don’t have strength to go fetch water on the other side of the township where water is still available.” She has to pay R5 for teenagers to collect 20 litre buckets for her. “I am unemployed. I don’t have enough money to pay them.”

Mpume Nduli said she now wakes up earlier than usual to join long queues for a standpipe that still has water. It is located a few kilometres from her home. “The situation is terrible. We don’t have enough water to flush toilets. We just recycle bathing water and use it to flush. Our toilets are now smelling and we are scared that we’re going to get sick at the end of the day,” she said.

Phumlani Ntozakhe said she had to throw away all the meat she had in her refrigerator on Thursday because it was rotten. “My fridge is now empty. I am only eating tinned stuff because it would be pointless buying meat while we are without power,” she said.

Ward councillor Derrick Qwabe (ANC) said: “The situation is bad. We are trying to bring in a water tanker to provide clean water.” But he said this was difficult because the tanker drivers were also protesting.

Msawakhe Mayisela, the municipality spokesperson, said the dispute is now before the central bargaining council. This came after inconclusive talks between the municipality and the striking workers. The discussions at the bargaining council will commence on Monday but could take a month to conclude. “We urge our workers to desist from violent strikes that cripple the operations of the city. Recently we had to spend a lot of resources and money to clean up the mess that was left behind by our workers in the central business district,” said Mayisela.

He apologised to residents whose access to basic services had been disrupted. He said a principle of “no work no pay” would apply. Workers could face disciplinary action as the City obtained an interdict against the strike, he said.

Mchunu said municipal management had increased MK veterans’ salaries by more than 100%. He said an MK veteran employee doing a plumbing job who used to earn R6,000 would now earn R20,000 a month.

A protester told GroundUp: “We are not against the promotion of MK veterans but we must be all be promoted. We all came here to work because we all need money. No one should be treated specially just because he or she went into exile.”