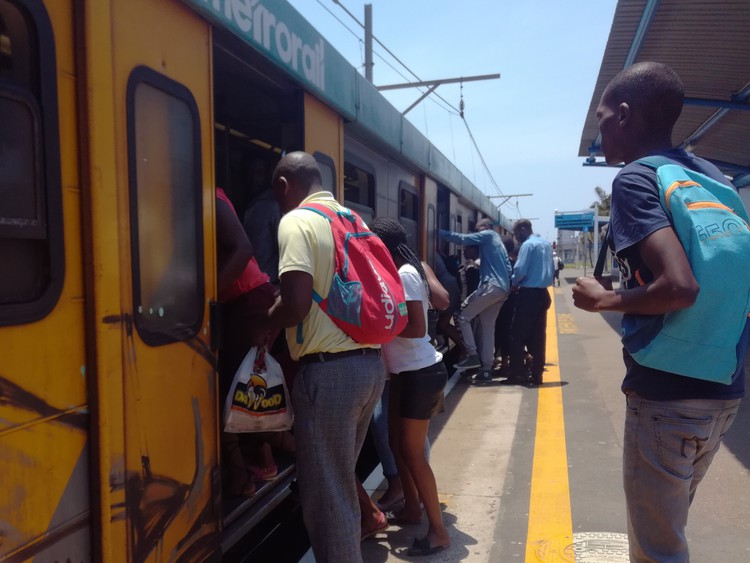 “He didn’t even wait for me to explain why I was late. I was just told to pack my things and leave,” says Philile Nzimande, who was fired from her job because of Durban Metrorail train delays.

Nzimande said she had arrived two hours late after the train from Umlazi “stopped in the middle of nowhere” due to power failure. “When the train finally arrived, I still had to walk 20 minutes to get to the office. By then I was sweaty and anxious, trying to explain to my manager that coming late was not my fault,” she said. She had been working at the company for two months.

That was five months ago. When GroundUp visited Dalbridge Train Station last week, Nzimande, 30, was one of several people waiting for a train to arrive. She was travelling back to her home in Umlazi after what she described as “yet another fruitless day” of looking for work.

“I have been waiting for a train for almost an hour,” she said. “I have no choice but to continue using the train because it is the cheapest option. Buses and taxis cost twice as much,” she said.

Nzimande’s story is not unique among Metrorail commuters in Durban. Every day during peak hours, carriages travelling from townships into the CBD are overcrowded. Several commuters also raised concerns about frequent delays, train cancellations and poor train maintenance.

Another regular Metrorail commuter, who asked not to be named, said he too feared losing his job as a trainee engineer if he is late again. He takes two trains from his home in Umlazi in order to be at work on time. “I was given a final written warning because the irregular times and delays of the train,” he said.

“I need to be at work by 7am sharp for field work. One morning, the train was delayed due to power failure. Now I take two trains that are less crowded from the urban areas. This means I travel at least two hours from Umlazi to Umbilo. It’s a compromise I’ve had to make to keep my job,” he said.

GroundUp contacted the provincial spokesperson for Passenger Rail Agency of South Africa (PRASA), Zama Nomnganga, for comment. Despite several calls and emails since 20 November no response was given. When GroundUp spoke to Nomnganga’s PA, Nomfundo Gomba, she promised to forward our query, but no response had been received by the time of publication.

PRASA KZN Spokesperson, Zama Nomnganga responded on 30 November. He said he would make a formal apology to Philile Nzimande who lost her job due to the delays. “Commuters are entitled to an official letter from PRASA as proof after a delayed train to provide to their employers,” he said.

Nomnganga said the main cause of delays was cable theft and vandalism. “Crime is responsible for many of the issues faced daily by the commuters, it has proven difficult to combat even by having visible security on the railways to monitor … Trains and signals might be fixed in the morning but by the following day criminals have already stolen the cables and signals, and traffic controlling equipment is gone causing yet another delay,” he said.

Nomnganga also said that the trains currently in operation are old and outdated and so they have to be fixed frequently, “an issue that we hope will be solved with the new trains and infrastructure underway”.