Durban lifts ban on fishing in its harbour 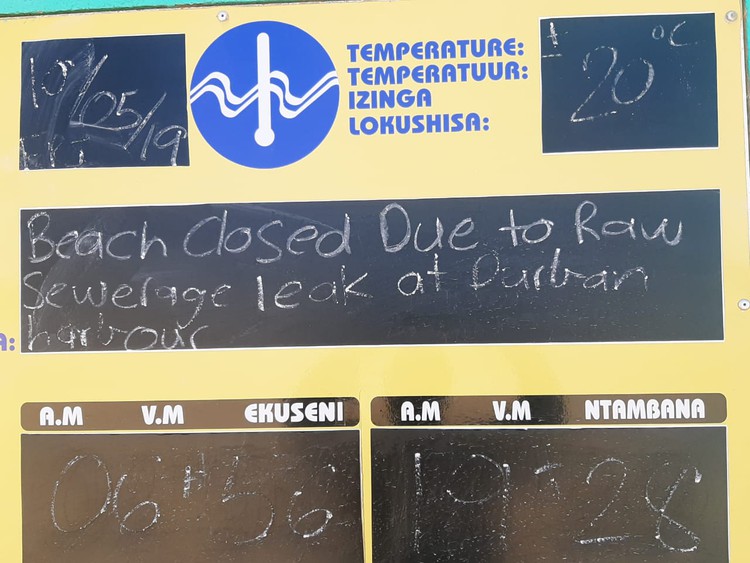 A sign in May 2019 informed people that Durban’s North Beach was closed. Photo: Fred Kockott

Transnet National Ports Authority has provisionally lifted its ban on fishing and commercial diving in Durban harbour, but it has warned port users that they do so at their own risk.

The ban was imposed after mechanical failures at an eThekwini municipality sewage pump station allowed hundreds of thousands of litres of raw sewage to discharge into the harbour in May.

The discharge forced authorities to close Durban’s beaches and led to the cancellation of an international surfing contest.

The authority said in a statement on Friday that it had lifted the ban after an improvement in harbour water quality, but urged users to take care.

The harbour master, Captain Sabelo Mdlalose, said: “Marine water quality in the Port of Durban has substantially improved, although water quality in some areas of the port remains compromised.”

He said port users should exercise care, especially in areas near stormwater outfalls and canals.

The discharge – some “20% of flow” – was concentrated at Lavender Creek, near the Point Yacht Club, leaving the waters in the popular recreation area murky and the air pungent with the reek of faeces.

At the time the municipality said a failure of mechanical rakes at the entrance to the sewerage pump station at Mahatma Gandhi Road was the main cause of the spill. The rakes were meant to prevent foreign objects entering the pumping system, but once they had ceased working an ever increasing amount of foreign matter entered the system.

“The pumps became imbalanced and the consequential vibration caused the pumps to fail mechanically. The pumps are fully imported and consequently their spare parts are not available locally, which has caused a delay in repairing the pumps,” municipal spokesperson Msawakhe Mayisela said in a statement in May.

The rakes and pumps have since been repaired, but Mdlalose warned that despite this, “blockages within the eThekwini Municipality’s sewage reticulation network are a common occurrence which can result in the discharge of sewage into the stormwater system leading into the port”.

Mdlalose said the authority would not be held liable in the event of loss or damages incurred by anybody choosing to make contact with port waters before authority declared port waters as fully safe.

The authority said port-wide water quality monitoring conducted by the Council for Scientific and Industrial Research on 10, 20, 24 and 31 May indicated that faecal contamination in the port was decreasing.

Update shortly after this article was published:

Asked for comment, the Durban of Chamber Commerce appeared sceptical of developments. It said:

This situation is not only unsustainable but detrimental to the Port, its supply and value chains. This includes businesses in and around the Port such as charter operations and diving as well as tourism and hospitality businesses like hotels, restaurants and conference centres. The Port is at the very heart of the City’s economy. Sewage spills as a result of infrastructure disrepair, lack of maintenance and much needed upgrades, if not resolved will result in significant economic losses. This will also further exacerbate socio-economic challenges such as unemployment. The Durban Chamber also believes that compliance to environmental legislation is critical and we actively advocate this as well as other policy issues in our Environmental Affairs Business Forum and the Durban Port Committee.

The Chamber said that aside from the environmental impact, it was also concerned that the ban will affect impact companies using the repair quays and diving contractors conducting other work in the harbour. “The ban also restricts fishing activity,” said the Chamber.

The statement concluded: “The Durban Chamber calls for clarity and immediate action on this issue to avoid further detrimental effects on our local economy.”