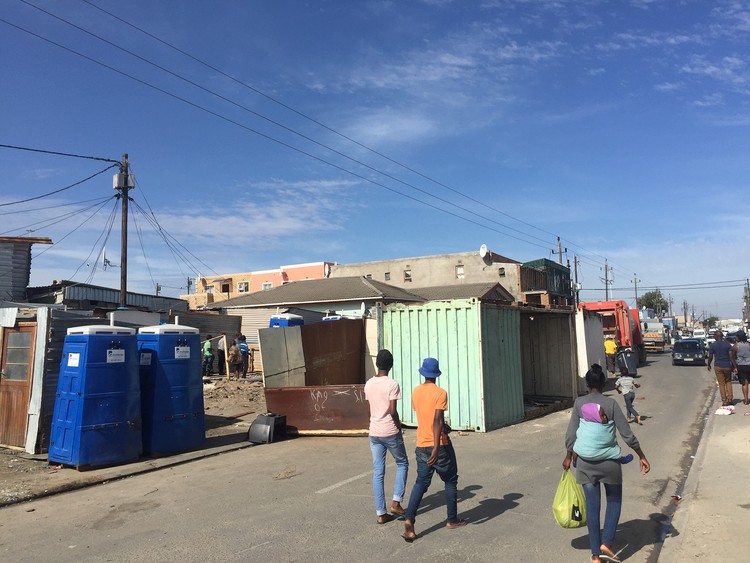 For the second time, residents of Dunoon informal settlements pushed two shipping containers onto the road to make space for flush toilets and for housing. Photo: Peter Luhanga

Residents of informal settlements in Dunoon, Cape Town, pushed two shipping containers into the road at the weekend to make space for new toilets and shacks.

On Wednesday, GroundUp confirmed that the containers were still in the road and were no longer being used by local businesses.

Community leader Xoliswa Mbetheni told GroundUp that the three informal settlements along Usasadza Street – Marcus Garvey, Robben Island, and West Beach – had been sharing seven newly-installed flush toilets. They have to cross Usasadza Street to get to the toilets.

Mbetheni said that a total of 160 families shared these toilets. On Sunday, she said, residents decided to move the containers. About 100 residents, mostly women, pushed logs under the containers and pushed them onto Usasadza Road road, blocking one lane. Small businesses are run out of the containers and residents say the owners live in better conditions than they do.

This is the second time that residents have done this. Early in February, the residents pushed the same containers onto Usasadza Road, for the same reasons, and the City of Cape Town responded by installing chemical toilets for them. But residents say they do not want chemical toilets, but flush toilets like those installed on the other side of the road, in the West Beach settlement. They also want more space for houses.

“We just need the land. Our kids will get knocked over by cars crossing the road to access these toilets,” Mbetheni said. She said the space was also needed for for housing as many families lived in crowded one room shacks.

At Marcus Garvey, said Mbetheni, residents had convinced a businessman running a panel-beating business to release some of the land for residents to built shacks on. Twenty-five new shacks had been added to the 160 households already there.

“All are using the seven flush toilets, hence the need for the land on which the containers were placed,” she said.

At the flush toilets in West Beach there is a communal water standpipe. When RDP house residents’ taps run dry, because their day’s allotment of 350 litres of water is finished (as a result of the Water Management Devices installed on their property) they go to the communal standpipe to fetch water. This has prompted the informal settlement residents to lock the tap, and keep the key for their own use. They do this to save water, said Mbetheni.

She also said that the flush toilets are locked.

“We don’t allow anyone who does not live in our informal settlements to use our toilets. We clean them ourselves,” she said.

Approached for a comment, the City’s mayoral committee member responsible for informal settlements, Xanthea Limberg, said the City’s water and sanitation officials were not aware of the shipping containers being pushed onto the road.

She said Dunoon was a very dense settlement. “Individual portable flush toilets” had been offered to the community but “this offer has not been accepted”, she said. These toilets are supplied to households with a sealed container which is collected and emptied by a City contractor.

Rather than lock the communal tap, she said, the City would prefer residents to report excessive water use to the municipality.