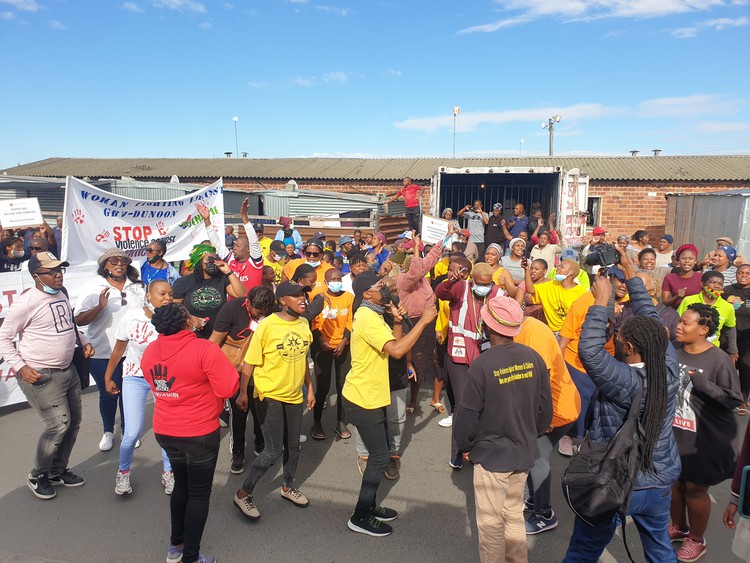 Supporters of Ilitha Labathu joined friends and family of Brenda Mqela to march in Gugulethu on Thursday to demand justice for her murder. Mqela, whose mother has for years been a counsellor at the advocacy organisation, was stabbed to death last week. Her boyfriend is accused of killing her last week. Photo: Mary-Anne Gontsana

About 100 people marched through the streets of Gugulethu on Thursday to demand justice following the death of Brenda Mqela who was killed allegedly by her boyfriend last week.

This comes as a 66-year-old man, who is believed to have been her boyfriend, is expected to appear in the Athlone Magistrates Court on Friday, charged with her murder.

Police spokesperson Captain FC Van Wyk said Mqela aged 48 was stabbed to death last Tuesday at 10:40pm at NY3a in Gugulethu. He said the 66-year-old suspect was arrested the same night and briefly appeared in the Athlone Magistrates Court on 7 May.

The march on Thursday was organised by Ilitha Labantu members where Mqela’s mother has worked for years as a counsellor. The organisation focuses on advocating for the rights of women and children.

The group walked from the Gugulethu police station, singing and waving placards until they reached the accused’s house where Mqela was killed.

Ilitha Labantu’s Ludwe Nkomo said, “This is a peaceful march, a march for everyone. This is a march for Brenda and a march to say that we need to end gender based violence.” He also thanked the police in Gugulethu for their swift arrest of the suspect.

By the time the group reached NY3a, more residents had joined the march.

Mandisa Monakali, founder and president of Ilitha Labantu told the crowd, “Enough is enough. To this man who killed Brenda, we say no bail. He must rot in jail. Let him be used as an example for other men who are killers.”

“Brenda we are here today to collect your spirit … We need to fight the abuse of women. Women stop tolerating nonsense from these men. Men help us in this fight. Stand with us.”

Monakali and women leaders of faith organisations laid bouquets of flowers at the gate of the accused’s house.

Reverend Yvonne Daki, who is Mqela’s aunt, said that the family knew about alleged abuse by Mqela’s boyfriend.

“There have been many incidents. He has beaten her to a pulp. There was a time when Brenda fled that man’s house at 2am because she feared for her life. There’s a time where he chased her in the street with a knife. We have seen Brenda bleed. It is painful,” said Daki.

After the accused’s house, the marchers went to Mqela’s home, where prayers were said for Mqela’s mother, Nomaxaba Mqela, who cried uncontrollably.