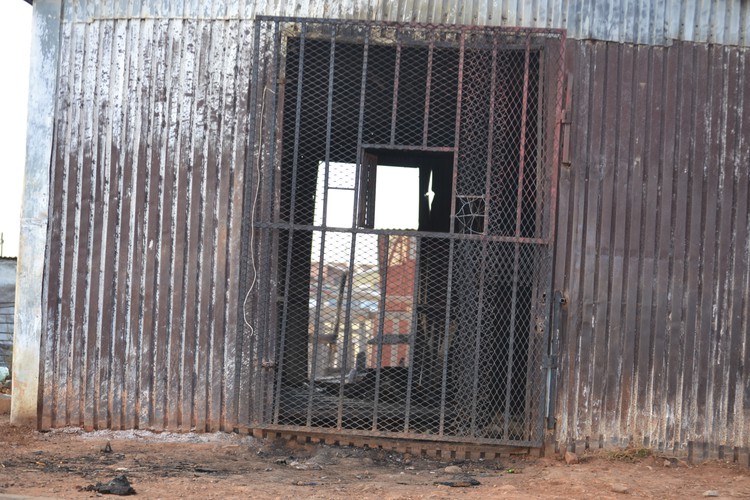 One of the shops in R Alexander Street in Gunguluza torched during looting on Friday. About 15 shops in Area 11, Gunguluza, are closed. Owners of shops fled the area fearing for their lives. Photo: Thamsanqa Mbovane

Dozens of spaza shops have shut their doors in KwaNobuhle, Kariega on Monday, fearing they will be targets in ongoing sporadic protests and looting in the area. Some foreign shop owners have fled the area while others sought shelter from the police.

This follows the widespread looting, shooting and the torching of spaza shops across six wards in KwaNobuhle and neighbouring Khayelitsha since last Friday. The looting spree is believed to have been sparked after one man was shot dead in an attack on an Ethiopian national who owns several shops in the community.

According to a statement by Acting District Commissioner Brigadier Thandiswa Kupiso criminals targeted several spaza shops, resulting in the death of Sinethemba Leve aged 31, on Friday.

“It is alleged that three armed suspects overpowered the shop owner. They took cash from him and a scuffle took place. Two suspects then started shooting and killed their own accomplice. The owner escaped unscathed. A 9mm pistol was found in possession of the deceased,” said Kupiso.

Residents who were nearby the shop said the deceased’s friends later returned to the shop in a convoy of cars. The shop owner managed to flee the area but his shop was looted and torched.

A witness said, “Everyone, including children, stormed into the shop and got out with all kinds of food. The looting spree spread to other areas as well. The spaza shops have not been operating in other areas due to tension.”

A Somalian man, who refused to be named, recounted having to flee the town, while other immigrant shop owners sought shelter at KwaNobuhle Police Station.

In a separate incident, another shop was allegedly robbed in Golomi Street. “When the shop assistant refused to hand over any money, the shop was set alight. While the victim named Habtamu Bherina ran out, he was shot several times and was declared dead at the scene,” Kupiso said.

In another two incidents, two men aged 27 and 26 died when one shop was set alight and another shop looted. “At about 19:30, a shop in Bantam Street was looted and the owner, Dareba Badol aged 27 was also fatally wounded. Nkululeko Jonas (26) died of suspected smoke inhalation after his shop was set alight in Pilani Street, KwaNobuhle,” she said.

Kupiso said police have been helping shops to close and to escort some shop owners out of the area. Public Order Police and the Anti-Gang Unit remained in the area to ensure stability. Kupiso urged residents with information about the attacks and looting to come forward and assist the police in bringing the perpetrators to justice.