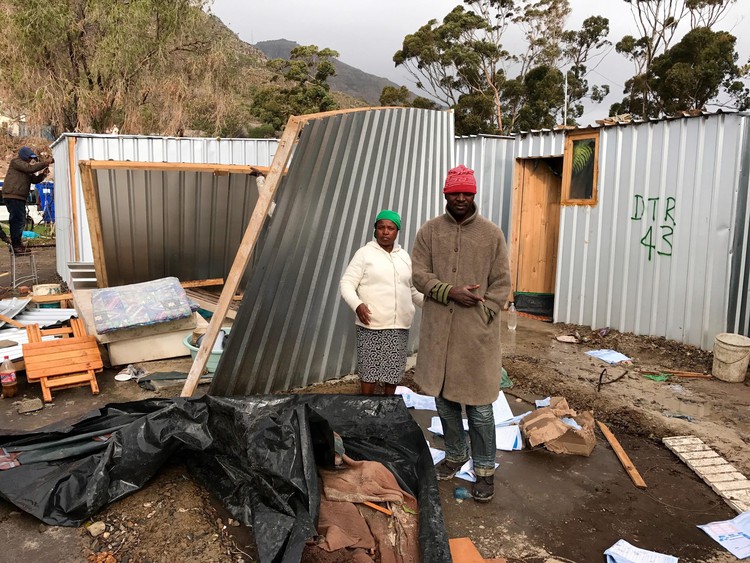 Olga Kotswana and her husband Sam Dube stand where their shack used to be in Imizamo Yethu, Hout Bay’s informal settlement. “I was sleeping when it fell,” said Kotswana. Their home was destroyed at about 10:30pm last night during the storm. “We’ve got nothing. No blanket. No food. Nothing.” Their shack was one of the temporary ones provided by the City of Cape Town after fires ravaged the township in March.

Neliswa Mbanga stands in front of her home, number 36, which was damaged after the high winds of the storm tipped a house to one side. Mbanga is also living in one of the temporary shacks provided by the City following the March fires.

Residents climb through the rubble made by a tree downed by the wind.

Abraham Shatimwene, Samuel Hiavali, and Paulis Shatimwene in front of their home, which was badly damaged by Tuesday night’s storm. They are in the process of replacing their roof and one side of their shack in preparation for more winds throughout the week.

Lovers Magwala, a resident, explained that winds had tipped the community’s toilets. He said that residents were now using the hill as a bathroom.

Residents living in shacks provided by the City prepare for more high winds as the storm continues by placing tires, branches and bricks on the roofs of their homes.

Portia Mawilk, who supports her mother, child, and two sisters, had her newly built shack blown away last night and the zinc materials stolen. “I don’t know what I’m going to do now,” she said. Her previous home was destroyed in the March fire. She is currently staying with a neighbour.