“No number” residents fear they will never get a house 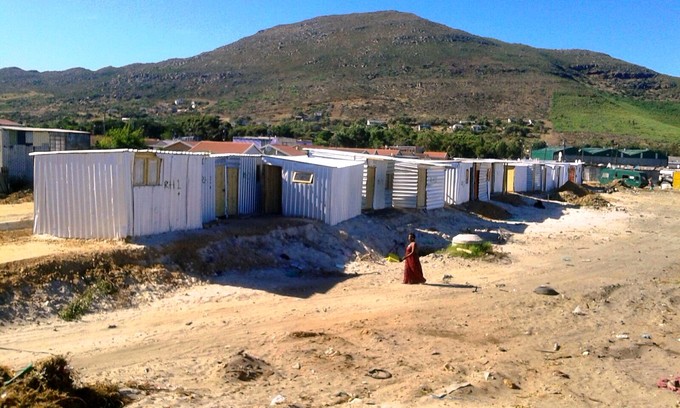 Shacks that were built this past weekend for 42 of the fire victims living in the community hall. Photo: Thembela Ntongana

Masiphumelele residents who cannot provide shack numbers fear they will lose out on the City of Cape Town’s assistance to victims of last November’s devastating fire.

The City’s registry recognises 169 registered people who still need assistance, according to Councillor Mzuvukile Nikelo. But residents say there are far more people who need assistance but who do not have shack numbers.

The fire, on 29 November 2015, destroyed about a thousand homes and left some 4,000 people homeless.

Last weekend, 42 of the residents who had been living in the community hall were given building kits to start rebuilding their homes. The remaining fire victims are still in the hall or living with friends and family.

Nikelo said the City would deal with the remaining residents in the hall as more land was cleared for them to build their structures.

He said he would then meet with community leaders to discuss the fate of those fire victims who could not provide a shack number and so were not on the main City register. People who were renting from residents with a numbered shack, and those who moved into the area after the shack numbers had been allocated, do not have numbers and have not been assisted by the City.

Nikelo said that the system of registering “no number” residents had flaws as it left room for people to submit the names of friends and family.

He said there were true victims of the fire who had no numbers but there were also people living in backyards who were looking for a place to live rent-free by getting onto the list.

Phindile Ndongeni and Mzingisi Ndwayi, both “no numbers”, are among those who have not yet been given space to build their shacks. They are worried that the only people who will be helped are those living in the hall. Before the fire, they shared a four-roomed shack with two others. Since November they have been living with friends and they say they have lost hope of getting a place.

Ndongeni said the four friends had agreed that one of them, whose partner was expecting a baby, should use the house number, as they couldn’t all register with the same number.

“We had to give him the number because his partner was expecting a baby and we wanted them to have a place to stay” said Ndongeni.

“We had a big four room shack, which we shared but when we registered we were told we could not all use the number, and some of us must register as ‘no numbers’. But now we are told we stayed there illegally.

“How are we illegal if the house we stayed in had a number?

There are many others like Ndongeni and Ndwayi in Masiphumelele who registered their names in hopes of getting a home to stay but were told their names do not appear on the list of people affected by the fire.

Ndwayi, who was left with nothing but the clothes on his back after the fire, said:

“We can’t all stay at the hall. We need our own places to stay, so we can also start rebuilding our lives.”

The City told GroundUp that it would look into Ndongeni and Ndwayi’s case.