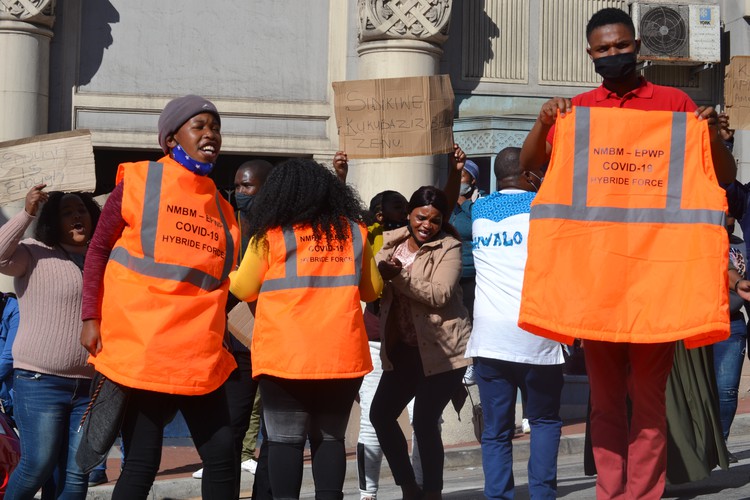 Expanded Public Works Programme workers protest outside the Noninzi Luzipho Building in Port Elizabeth on Friday afternoon, because they have not been paid since 1 May. Photo: Thamsanqa Mbovane

Over 50 Expanded Public Works Programme (EPWP) workers protested outside Noninzi Luzipho Building in Port Elizabeth on Friday afternoon. The workers claim that they are owed backpay to 1 May 2020.

Their duties include screening, identifying vulnerable homes across the city’s 60 wards, as well as visiting spaza shops in townships and other informal traders to educate them about the regulations.

They signed contracts on 28 April. General workers are meant to get R160 per day for 20 days and team leaders R180 per day, the workers said.

Nomaxabiso Mondile from ward 45 in KwaNobuhle, Uitenhage, said, “We were promised the first salary will be paid on 25 May. We were not paid and again told we will get it on 25 June. When we asked, they said there was someone with Covid-19 at payroll so they could not process salaries.”

Mondile said despite their threats to protest, the City is yet to pay them.

“We approached them again on 28 July demanding that all workers be paid. They asked us to give them two days. Even last night, we waited,” she said.

EFF regional spokesperson Luvuyo Ponase told picketers: “I spoke to Mr [Sicelo] Mnyaka who is supposed to ensure you are getting paid but he said people were supposed to be paid either Thursday or Friday.”

Mnyaka, an EPWP manager in Nelson Mandela Bay Municipality, initially came outside but later decided to have discussions inside the Noninzi Luzipho building.

He refused to talk to the media saying it was against municipal policy.

GroundUp has sent questions to the City. The story will be updated.