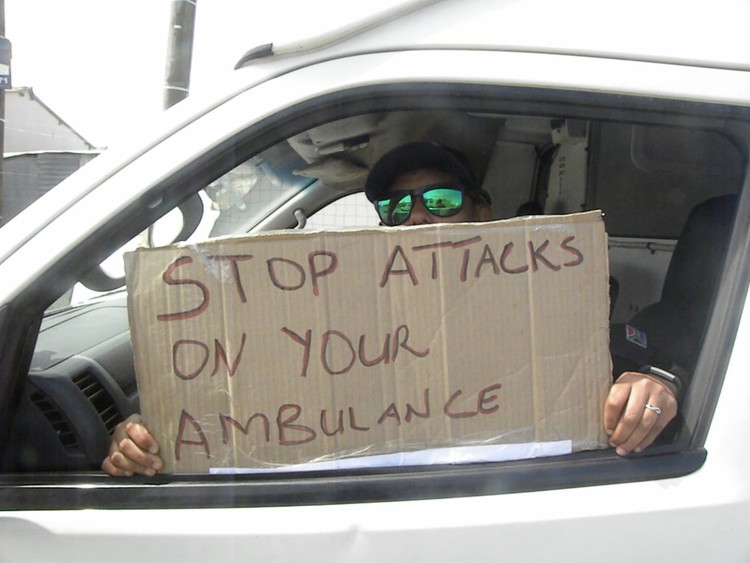 Eastern Cape ambulance drivers and their assistants are appealing for protection from community members following a spate of robberies while on duty.

A group of about 30 Emergency Medical Services employees drove on Thursday and Friday in ten vehicles through Port Elizabeth townships, appealing to people not to attack them.

“We are not on strike or protesting, but our message to the community is that they should allow us to do our job without fear of being attacked,” said a worker who did not want his name used. He was addressing residents on Friday in Captain Street, NU10, Motherwell. “This service is for the community and our job is very important because we assist the sick and the injured. Our members are being attacked day and night. Criminals take valuables like cellphones, money, watches and bags.”

He said workers had stopped attending to patients at their homes unless they were escorted by the police.

“We go to townships with police escorts because criminals have robbed us, even in the house while treating patients,“ he added.

But Motherwell Cluster Commander Major General Dawie Rabie said it was not the responsibility of police to escort ambulances. “If we have to escort every other organisation or company experiencing problems, our core functions of policing will be defeated.”

He said communities needed to take a stand against such attacks on emergency services.

Police spokesperson Colonel Priscilla Naidu said no one had been arrested for robbing ambulances.

Another ambulance driver said community members were afraid to point out criminals to police. “One of our team was robbed last month while attending to a patient at a house in Soweto-on-Sea. The woman who lives there admitted knowing the criminals but she was afraid to point them out to police. This makes our job very dangerous.”

He said an ambulance transporting a patient to Dora Nginza hospital had been robbed at gunpoint at a robot. The crew and the patient had been robbed of all their valuables.

Spokesperson for MEC for Health Sindiswa Gomba, Judy Ngoloyi, said a high level meeting involving the MEC would be held in Port Elizabeth this week to address the issue of security of ambulance personnel.