Domestic workers want to be covered for occupational injuries 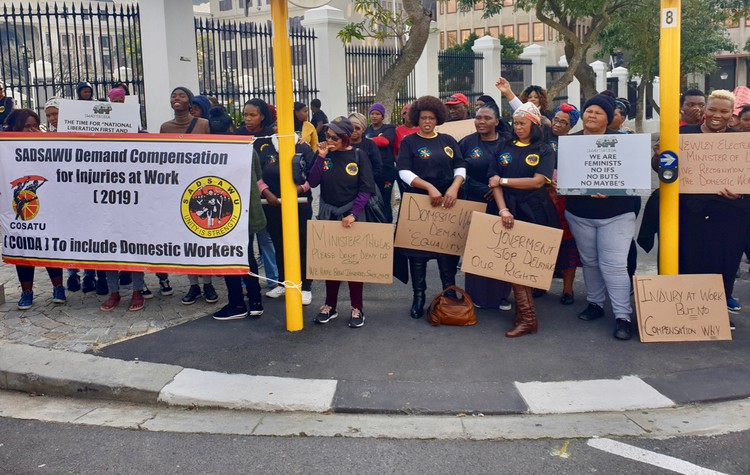 About 50 domestic workers and members of the South African Domestic Service and Allied Workers Union protested outside Parliament to demand that the government include them in the Compensation for Occupational Injuries and Diseases Act. Photo: Mary-Anne Gontsana

About 50 domestic workers and members of the South African Domestic Service and Allied Workers Union (SADSAWU) protested outside Parliament on Monday to demand that the government include them in the Compensation for Occupational Injuries and Diseases Act.

On 23 May, a judge ruled in the Pretoria High Court that the exclusion of domestic workers in the Compensation for Occupational Injuries and Diseases Act of 1993 is unconstitutional. But the law has yet to be changed.

SADSAWU president Hester Stephens told GroundUp: “We have been fighting for years, till now, to get social security for domestic workers. We want to be included in the Act. Right now for example, some of the workers are exposed to dangerous chemicals at work that they use to clean, without the employer providing protective gear.

“Domestic workers sometimes fall ill from something at work, but they are not helped in any way. As domestic workers, we contribute to the economy but we are so unappreciated. We do not have support from government,” said Stephens.

Stephens said some domestic workers were underpaid: “Getting as little as R1,200 a month. How can you survive with that money? What about the children? The school fees, school transport, school uniform? It’s too little.”

Singing struggle songs and dancing, the group held up placards with: “Injury at work but no compensation” and “Government stop delaying our rights”. Some waved feather dusters and mops.

Nolitha Nora Mkhosi has been a domestic worker for 23 years in the service of one family. The house where she works is a double storey with ten rooms. She said she receives R2,800 a month and is drowning in debt. “I cannot even afford to pay my child’s school fees.”

In a memorandum addressed to Minister of Employment and Labour Thulas Nxesi, SADSAWU demanded the approval of protection of domestic workers; a wage of no less that R3,500 per month; registration of all domestic workers for the Unemployment Insurance Fund; and contributions to a pension or provident fund.

The memorandum was accepted and signed by the chief inspector at the provincial labour department David Esau on behalf of Nxesi.