“We buy in the same shops, so we must be treated like all workers” 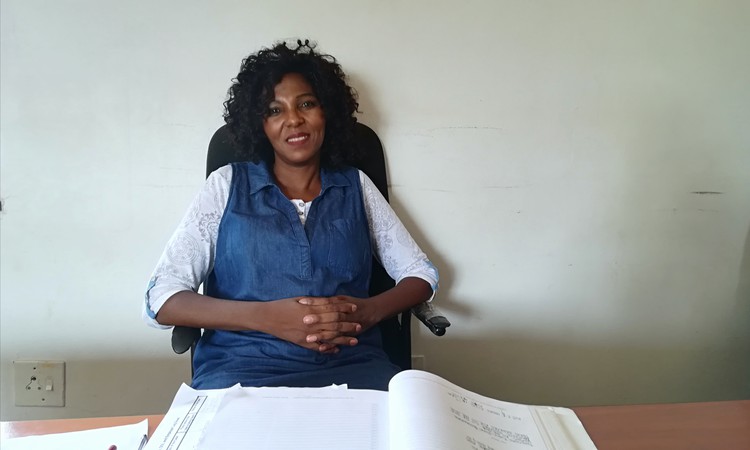 “We buy in the same shops, we pay the same transport, so we must be treated like all workers and get the same minimum wage,” says domestic worker Pinky Mashilane, founder of United Domestic Workers of South Africa.

Mashilane has worked as a domestic worker for over 30 years. She is currently involved in the One Wage Campaign — a coalition of unions and civil society organisations fighting for all workers to receive an equal minimum wage.

The campaign was launched in August 2019, eight months after the National Minimum Wage Act was implemented. The Act has been criticised by One Wage Campaign for setting the minimum wage lower than R20 for some workers.

“In Benoni, domestic workers in those big houses are getting R1,400 a month and they are working from Monday to Sunday … They are hopeless and helpless. How much is it to get home, to buy groceries for their children, school uniforms, toiletries? What do they do? That is not a life.”

Mashilane started working as a domestic worker in Mpumalanga in 1989. She was in grade 10 at the time.

“I grew up very poor so I was sent out to find a job to help out at home because they could no longer afford to keep me in school … I didn’t have any skills other than to clean a house, so I got a job as a domestic worker,” she says. Her mother and all her aunts were also domestic workers.

In 1994, she moved to Pretoria and continued to work as a domestic worker. She would take the train from Soshanguve to Pretoria central station with her two-year-old daughter every morning.

“There was this coach in the train where the people said they were comrades and if you went in there, they would make you clap hands and dance until you reached Mabopane station. They said if you have a baby, they will give you a seat, so I went to that coach because I wanted to sit down with my baby,” says Mashilane.

She says the people in the coach were speaking about workers’ rights. She started using the coach regularly and was then invited to a meeting about domestic worker rights organised by the South African Domestic Service and Allied Workers’ Union. She says the pressing issue at the time was getting unemployment insurance (UIF) for domestic workers.

“That was in 2000. We picketed outside the Department of Labour for UIF. I remember we were wearing T-shirts that said ‘I am entitled to UIF’ so that’s where I started,” says Mashilane.

According to a 2016 report by the National Minimum Wage advisory panel, the minimum wage is “one of the tools to close the wage gap, including between the genders, and thereby to overcome poverty”. The report said in a country with low levels of employment growth and high levels of poverty, “there has to be some intervention to support the most vulnerable in the labour market and the poorest of the poor”.

In November 2019, the One Wage Campaign submitted a legal and economic argument to the National Minimum Wage Commission - a commission set up to oversee the minimum wage - saying all workers must be recognised as equal under the law and ultimately, the minimum wage must be raised to a living wage.

“Such a system cannot survive scrutiny under the Constitution. It breaches the rights to equality, dignity and fair labour practices and perpetuates the existence of sub-classes, members of whom have been historically discriminated against and whose work is treated as less worthy than that of others,” said One Wage Campaign in a statement in November 2019.

Amy Tieke, Organiser at One Wage Campaign, told GroundUp that there was concern that the low wages of domestic and farm workers would pull down the minimum wage for all other workers, so the idea was to phase them into the R20-an-hour minimum wage over a year or two.

“But when that recommendation went to the state and the Act was passed, they didn’t include the guaranteed phase-in of those workers. They just said: ‘We’ll establish the commission and it can do research and decide if they want to recommend that change,’” Tieke told GroundUp.

Chief Director of Labour at the Department of Employment and Labour, Thembinkosi Mkalipi, said the National Minimum Wage Commission had two years to complete its work on equalising the minimum wage, so the final report would be at the end of 2020.

“The Act does not guarantee that minimum wages will be equalised. This will depend on the results of the research on whether there have been job losses as a result of the introduction of the minimum wage or not,” Mkalipi told GroundUp.