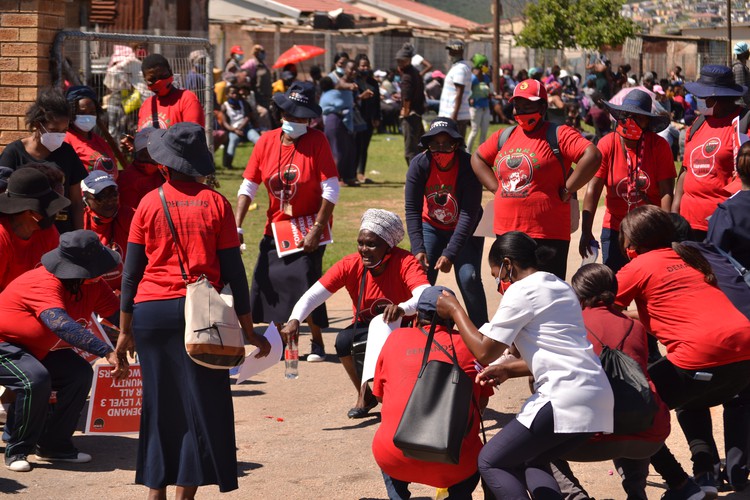 Workers whistled and carried placards while singing “Umoya wam uyavuma” (My spirit is alive) and “Noma besidubula, siyaya” (Even if they shoot us, we will march forward). They allowed patients to enter the clinic, but blocked fellow healthcare workers from entering.

It was the second day of action by the group. On Wednesday, while picketing outside the Laetitia Bam Day Hospital in KwaNobuhle, two women standing among protesters in the road outside the clinic were knocked, allegedly by a Uitenhage doctor driving a blue BMW. In a video seen by GroundUp, the car is seen driving into the crowd. The matter was reported to the police. The two women were not seriously injured.

In response to questions about the incident, police spokesperson Captain Gerda Swart said: “The reference that you provided is a normal accident report and not a criminal case. The matter will not be investigated by SAPS. It is only for insurance purposes.”

Speaking outside Mabandla clinic on Thursday, regional secretary Busiswa Stokwe said that the group protesting on Wednesday had been allowing ambulances to pass. “The female doctor who hit our members won’t be able to justify and explain why she did that. We do have pictures and videos of the incident.”

TAC Eastern Cape chairperson Thembisile Nogampula condemned management at Laetitia Bam for defending the doctor and saying that the group was preventing her from doing her work.

At the Rosedale Clinic in KwaLanga, nurses also went on a brief strike in solidarity with NEHAWU and to highlight shortages at the clinic.

In a statement on Thursday, NEHAWU said: “We will be writing to the MEC of Health Sindiswa Gomba to ensure that [Wednesday’s incident] receives the urgent attention it deserves. We strongly believe that the doctor had ill-intention to hurt our members and workers who are fighting for job security and benefits.”

The health department had not responded to questions at the time of publication.