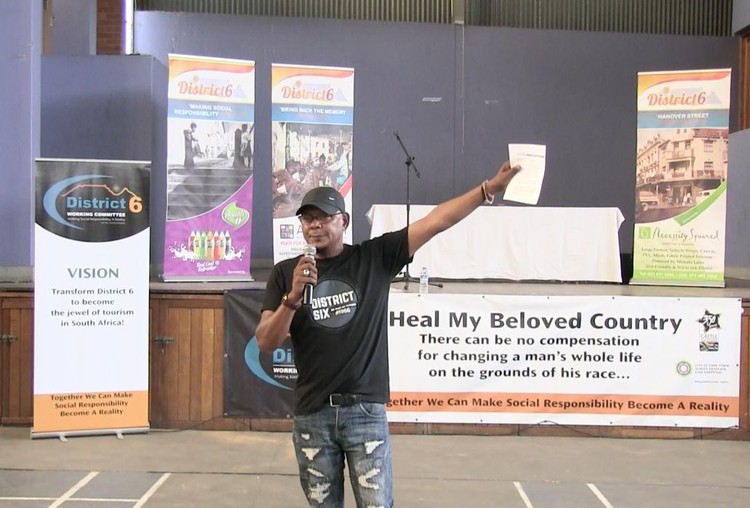 Shahied Ajam, the Chairperson of the District Six Working Committee, addressed dozens of claimants to land in the neighbourhood. Photo: Shamiel Benjamin

District Six claimants met on Sunday after the Department of Rural Affairs and Community Development failed to release a much-anticipated “holistic plan” for the restitution of the neighbourhood to its former owners.

A judgment by the Land Claims Court in Cape Town on 26 November 2018 ruled that the department was supposed to provide a plan on 26 February 2019. But it failed to do so, citing the December holiday as the reason.

District Six claimants have been fighting for land restitution since the process began in 1995 after the fall of apartheid. Various rounds of claimant applications have taken place, the latest in 2015.

The meeting in Blackpool Sports Centre, Salt River, was organised by the District Six Working Committee (D6WC). It was marked by frustration.

It began on a light note, with singing and jokes being told by a speaker while people filtered in. At 2:30pm serious proceedings began. Addressing more than 300 claimants, Shahied Ajam, D6WC chairperson, spoke for an hour. He described the various landmarks in the restitution process and progress made by the working committee towards providing claimants with support and advocacy during its five years of existence.

Farouk Behardien, a claimant, echoed this point. “The Reference Group… are people that are seeing to themselves … When [D6WC] started there wasn’t anything definite, but now there is something concrete,” he said.

GroundUp’s attempts to contact the Reference Group were unsuccessful.

Not everyone in the audience reacted positively. During Ajam’s second address that took place after a short break, two women claimants stood up and challenged him, saying that he was never subjected to the “bulldozers” that demolished their houses and the trauma it caused. This was after Sebastian Peterson from the African Progress Movement gave a speech urging the claimants to retake District Six now and at all costs. He was received with euphoric clapping and shouting.

When asked afterwards about the outbursts from the two claimants, Ajam said it was “shocking” and that it was “the first time it had happened”, but that he understood the frustration over the long time all of these claimants have had to wait. Ajam blamed the delays on government corruption and a “divide and conquer strategy” that it is pursuing.

According to Ajam, the meeting was also called to clarify exactly what the response of the Department of Rural Development meant in terms of restitution in the near future. He said that recent media reports have confused people about the time it will take for people to get their claims resolved. Ajam thinks that it is possible that the claims will be resolved within three years.

The Department of Rural Affairs and Community Development did not respond to our request for comment.