Workers are demanding to be reinstated at the University 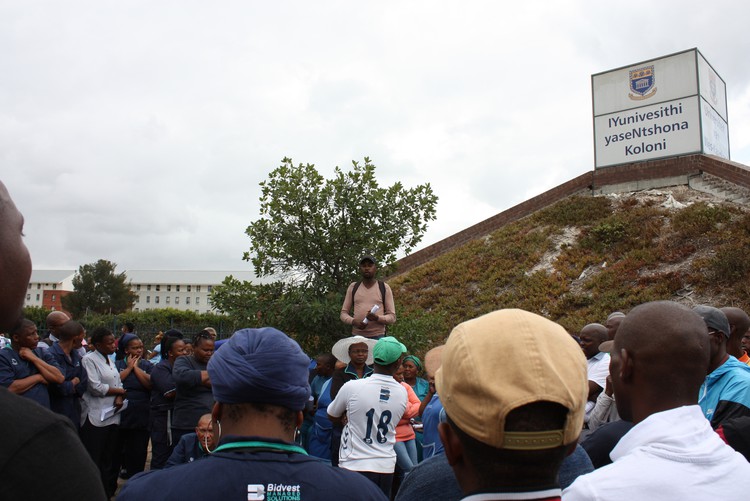 Disgruntled Securitas employees are expected to meet with management on Friday to discuss whether they will be reinstated at the University of the Western Cape (UWC).

Over 100 current and former Securitas workers met on Wednesday where they agreed to participate in mediation processes with Securitas.

This comes nearly three months after 144 employees were dismissed on 13 January following violent student protests. Charges leveled against the group ranged from being absent from work, to “hostage” taking, and “assault and robbery”.

On Wednesday, dismissed workers held a meeting at the corners of Symphony Way and East Drive in Bellville. They have been protesting at that spot for several weeks, petitioning to be insourced by UWC.

According to workers, Securitas had declined their requests to be reinstated at UWC and instead agreed to meet on Friday. The group has elected five representatives to attend the mediation at Securitas’ Training Center in Maitland on Friday.

“We wanted to engage with [Securitas] involving the University playing the part of the mediator,” said Ntobeko Mfaxa, one of the dismissed workers.

“But [Securitas] say that they only want to meet the worker delegates, and not involve the university,” he said. Should Securitas not be prepared to reinstate them at UWC, they would once again approach the University to discuss insourcing, said Mfaxa.

Last week, UWC told GroundUp that insourcing at the University was “unaffordable”.

“We are very happy to hear that the university is willing to engage with us in order to hire the workers directly. [But] they want us to meet with Securitas first so that we can come back and address them with what Securitas has said,” Mfaxa said.

Another dismissed workers, who asked not to be named, said: “We will go and listen but I know the hope is on the mediation process [between the workers and UWC]. We are not happy, we don’t trust [Securitas].”

Securitas and UWC did not responded to GroundUp’s requests for comment by the time of publication.