Workers call for employer to reinstate them 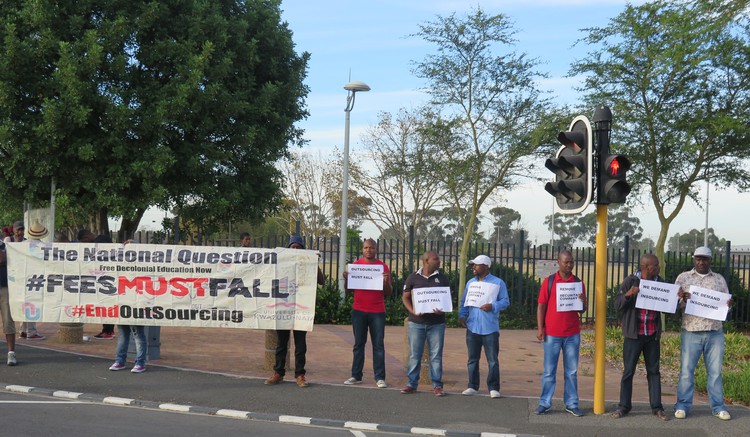 On Tuesday, dismissed University of the Western Cape (UWC) security guards demonstrated outside the university, calling for their employer Securitas to reinstate them. The 144 workers were dismissed by Securitas following the student protests last year.

Dismissed worker Sithembele Falteni said that he had worked at the university for six years. He has been without a job since October. His wife is unemployed. He said the family had struggled to pay for school registration, uniforms and books for his six-year-old.

“We didn’t enjoy Christmas. We were just looking at other people having fun,” he said.

On 13 January, Securitas dismissed the workers on charges of being absent from work without permission, “hostage” and “assault and robbery”. The workers admit that they weren’t at work but say they were forced to leave as students had shutdown the university.

“On 17 October, we were at work when the students came and removed us,” said dismissed worker Vusumzi Gononda. He said the protesting students shut down the campus and told everyone to leave. “And then they informed our line manager that we were not going to work,” he said.

When they returned once the shutdown was over, Securitas tried to interdict them, he said, but the court denied the urgent interdict.

Mark Sangster, the director of corporate governance at Securitas, said that they “have video footage of both the assault and hostage / holding managers against their free will, incidents and were therefore able to identify the staff who were implicated”.

“Staff absented themselves from the university during a period of student protest – this without our (the employer) permission. We requested them to return to work and also offered to redeploy them to another site if necessary. They did not return to work nor did they respond to our offer of redeployment, so we believed that we had no alternative but to proceed with the charges of absenteeism,” he said.

Gononda denied that the workers took anyone hostage, saying that the incident referred to was when the workers were demanding answers from management. He confirmed Sangster’s offer of redeployment but said workers didn’t want to accept this because they would lose the R2,000 top-up payment that UWC management was giving all outsourced workers, and would not receive a study rebate.

He said that during the “hostage” incident there were student and police on the campus.

Like Falteni, Gononda has also been unemployed since they were dismissed. “I’m still suffering,” he said, explaining that his two brothers are unemployed. He is also unable to pay for his sister’s registration fees at the University of Walter Sisulu.

He said Securitas had offered to re-employ some workers but only after 24 months and not at UWC.

Falteni said that he felt criminalised by the current security guards at the university. “They treat us [dismissed workers] like criminals, the security and the police that stop us from entering the UWC premises.” He said that when they want to visit friends at the university they are blocked from entering. “I’ve been working here for six years at UWC. I never stole anything. I never burnt anything,” he said.

UWC spokesperson Luthando Tyhalibongo told GroundUp that the matter was between the workers and their employer.