Disabled man fetches water with a bucket tied to his crutches

Pietermaritzburg resident has little hope elections will change his plight 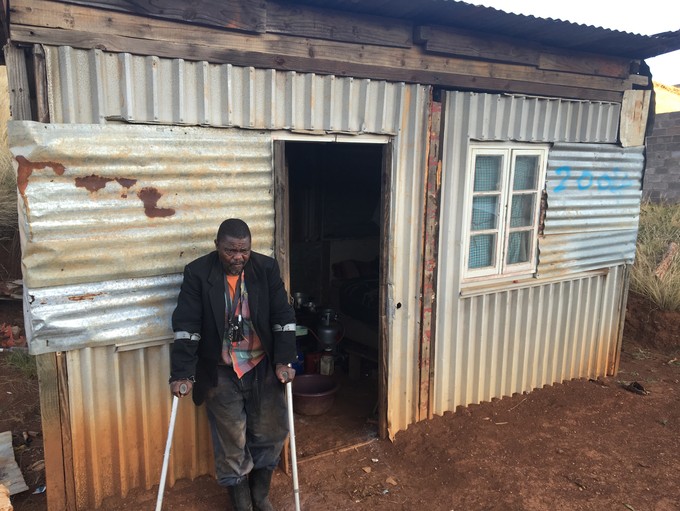 Simon Chonco has to walk for an hour on crutches to fetch water from the river. Photo: Ntombi Mbomvu

To fetch water, Simon Chonco has to tie a 20 litre container to his crutches with wire and walk for an hour to the river. He voted in the municipal elections, but has little hope that his pleas for a house with running water and electricity will be heard.

Chonco, 59, lives in Egoqweni in ward 11, of Msunduzi municipality in KwaZulu-Natal.

Chonco can’t speak properly and sometimes cannot not hear at all. He writes down what he wants to say. He is epileptic and walks with crutches.

He lives alone in a one-roomed metal shack, far from other residents. His single room has a bed with a pile of blankets, a bench, and several empty water containers. The floor is dusty.

He says he has been living in Egoqweni for six years.

Chonco voted in the August 3 elections, but not for the ANC councillor Sipho Madonda. Madonda, the sitting councillor whose candidature was marked by controversy, won with 77.45% of the votes cast, down from 88.7% in 2011.

Chonco has no faith that Madonda will change his living conditions.

“He has not been of help to me since I have been a resident. We have no water and no electricity. I want a better house but because he is never available I’m clueless about what to do in order for me to get a proper house. I survive through the mercy of my neighbours.”

“I can’t walk, I use crutches. The same crutches help me when I have to fetch water from the river that is far away from my house. The reason I voted for another party is because I’m hoping it will bring change. My ward councillor is useless,” said Chonco.

One of Chonco’s neighbours who asked not to be named said neighbours had spoken to Madonda about Chonco’s plight.

“As neighbours we have called him and told him about the situation but he never cares. I’m one of the people who have voted but I didn’t vote for the ANC. I voted for another party because we were hoping that if it wins, that is a message to the ANC to pull up its socks,” said the resident.

“All I want is a better house, access to water and electricity,” said Chonco.

Madonda told GroundUp he would ensure that there would be development in Egoqweni. “Nhlazatshe location is being prioritised. Water, electricity and roads will be the infrastructure that is put first in that location. As a resident of that location, Chonco will benefit accordingly,” said Madonda.